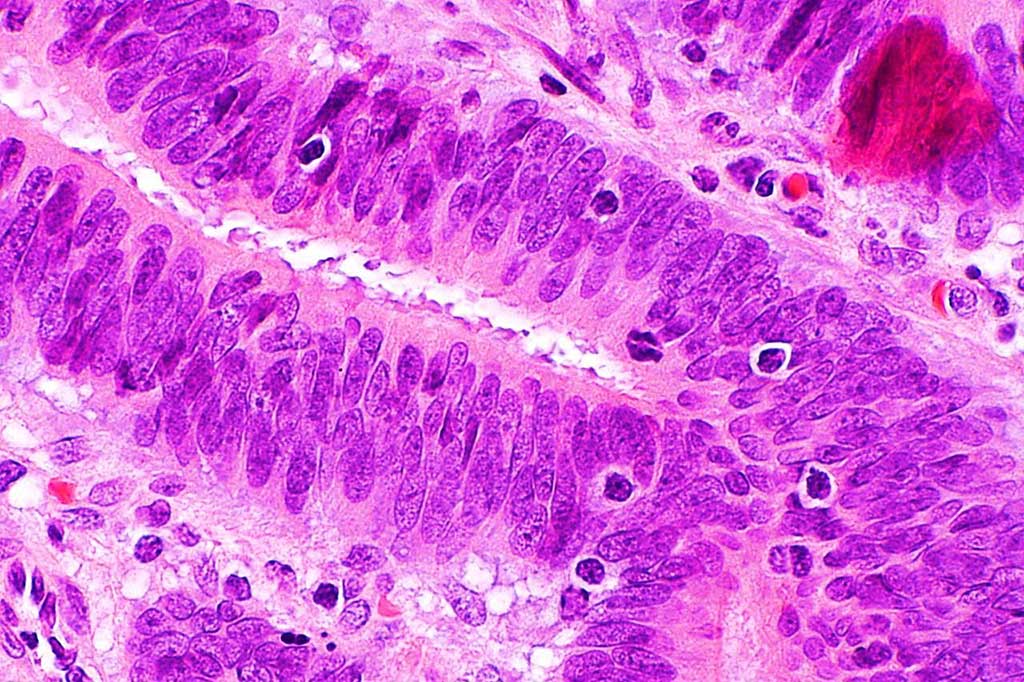 Image: Photomicrograph showing tumor-infiltrating lymphocytes in colorectal carcinoma which are suggestive of microsatellite instability (Photo courtesy of Nephron)
Identifying stage II patients with colorectal cancer (CRC) at higher risk of progression is a clinical priority in order to optimize the advantages of adjuvant chemotherapy while avoiding unnecessary toxicity. A remarkable feature of CRC is the difference in prognosis of patients diagnosed at early versus late stages of the disease.

Immune cells clearly play an important role in tumorigenesis, because evasion of immune surveillance and/or suppression of immune system have been described as a hallmark of cancer cells. In addition, it is well-known that tumor-immune interactions offer important prognostic information for some cancer patients.

An international team of scientists collaborating with the University of Barcelona (Barcelona, Spain) assessed the usefulness of measures of T-cell infiltration as prognostic biomarkers in 640 stage II, CRC tumors, 582 of them confirmed microsatellite stable. The team measured both the quantity and clonality index of T cells by means of T-cell receptor (TCR) immunosequencing in a discovery dataset (95 patients with colon cancer diagnosed at stage II and microsatellite stable, median age 67, 30% women) and replicated the results in three additional series of stage II patients from two countries.

All samples in the datasets were analyzed by immunosequencing. A multiplex polymerase chain reaction (PCR) system was used to amplify the variable CDR3β sequences of the TCR from DNA segments in seven gene families, 10 orphan segments in 10 gene families, both D genes and the 13 functional J segments. This approach generated an 87 base-pair fragment capable of identifying the VDJ region spanning each unique CDR3β. Then, amplicons were sequenced using the HiSeq platform (Illumina, San Diego, CA, USA).

In addition to immunosequencing, lymphocytic infiltration for the series was analyzed by hematoxylin and eosin (HE) stained histological slides used for diagnosis. The tumor samples from the discovery series were examined by two pathologists and scored for stroma and lymphocyte abundance. Three histological variables were studied: stromal lymphocytes (STLs), tumor-infiltrating lymphocytes (TILs), and the proportion of stroma/tumor. To analyze STLs, the pathologist evaluated five histological regions at a high-powered field (HPF, × 400) measuring the percentage of lymphocytes and plasmatic cells (excluding polymorphonuclear neutrophils) in relation to the surrounding stroma of the tumor.

The scientists reported that there was prognostic value of TCR abundance and clonality discovered in a retrospective study of 95 stage II colon patients. These results were replicated in two additional retrospective studies from Spain (N = 112 and 163), and other from Israel (N = 270). Results were confirmed both when fresh frozen and paraffin-embedded tissue were analyzed by immune-sequencing. High TCR abundance and low clonality index (more diverse repertoire) were associated with better prognosis. Though partially correlated, both provide complementary prognostic information.

The authors concluded that tumor lymphocyte assessment by TCR immunosequencing technique, which combines information about abundance and clonality, is an independent prognostic biomarker in stage II microsatellite stable tumors. The study was published on September 24 2020 in the journal PLOS Medicine.