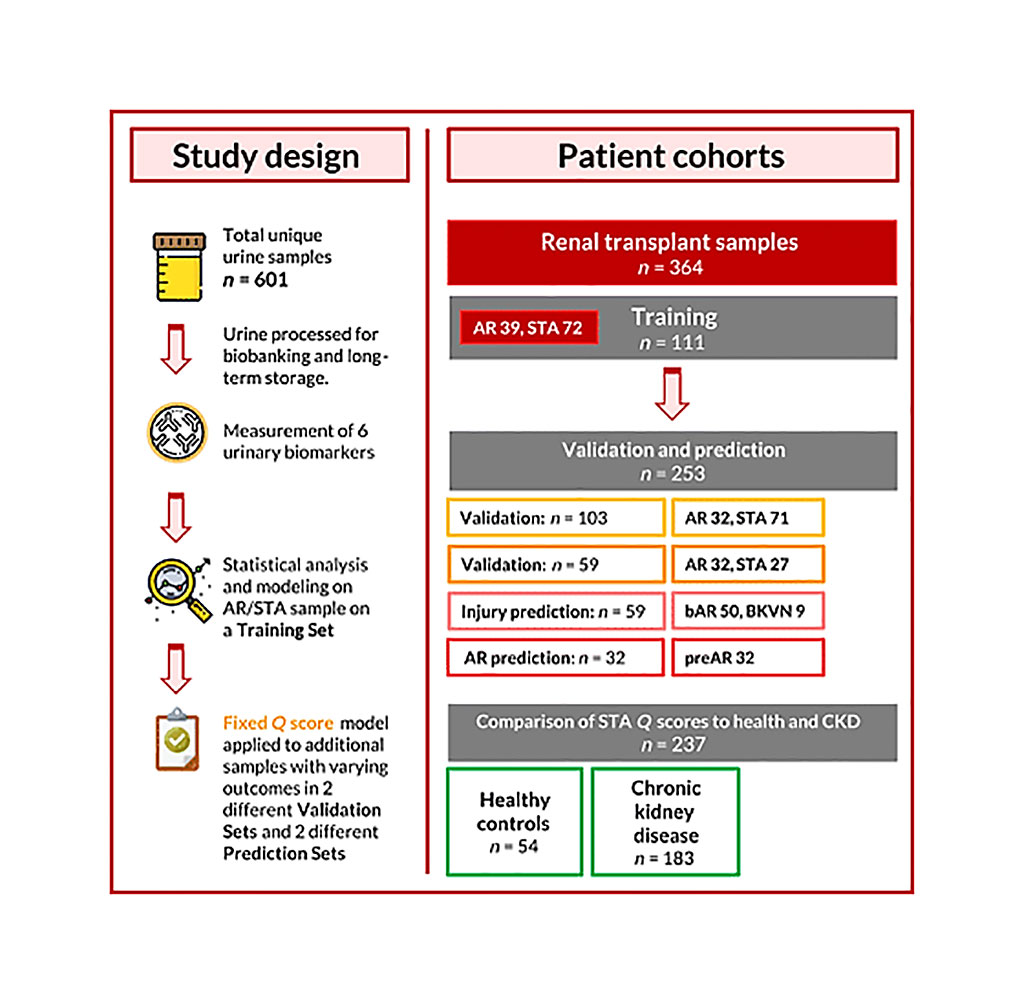 Scientists from the University of California, San Francisco (San Francisco, CA, USA) and their colleagues collected a total of 601 prospective urine samples from both pediatric and adult renal allograft recipients immediately before a renal allograft biopsy. Each sample was then paired with a renal transplant biopsy and classified into the following diagnoses: stable (170); acute rejection (AR, 103); borderline AR (bAR, 50); and BK virus nephropathy (9). The team also collected additional urine samples from 32 patients with AR before the rejection episode and paired them with biopsies.

The team evaluated a noninvasive, spot urine–based diagnostic assay based on measurements of six urinary DNA, protein, and metabolic biomarkers. The team used the QiSant assay (Nephrosant, San Francisco, CA, USA) that analyzes six biomarkers from 4 mL of urine sample: the amount of cell-free DNA (cfDNA); the fraction of methylated cfDNA; the proteins clusterin and creatinine; the inflammation marker CXCL10; and total protein amount in the urine. The assay uses a proprietary enzyme-linked immunosorbent (ELISA)-based tool, including a 5' biotinylated oligonucleated immunoprobe to target cfDNA fragments, and artificial intelligence to estimate the likelihood of acute kidney rejection. After collecting patient samples, the scientists developed a composite Q score — ranging from 0 to 100 — on all six biomarkers in a training set of 39 AR and 72 stable patients (STA).

In the first validation set, which had 32 AR patients and 71 STA patients, the group found that the score between the patient types had about a 91% clinical sensitivity and a 92% clinical specificity. Meanwhile, in a second validation set of 32 AR patients and 27 STA patients, the team found that the scaled score had 100% sensitivity and 96% specificity. Most patients with samples (159) with scores above the AR threshold had a clinical diagnosis of active AR, early AR, or went on to develop biopsy-confirmed AR up to 200 days after using the QiSant assay.

The authors concluded that they had demonstrated the clinical utility of this assay for predicting AR before a rise in the serum creatinine, enabling earlier detection of rejection than currently possible by standard of care tests. This noninvasive, sensitive, and quantitative approach is a robust and informative method for the rapid and routine monitoring of renal allografts. The study was published on March 18, 2020 in the journal Science Translational Medicine.