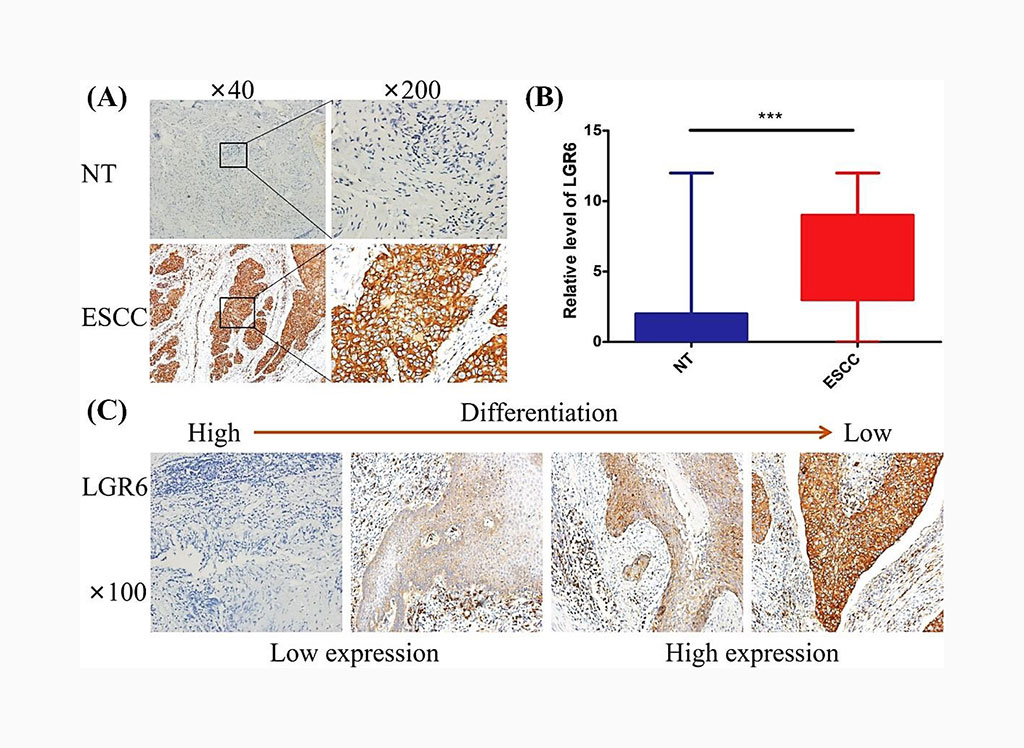 Image: Histological immunostaining showing expression of leucine‐rich repeat‐containing G protein–coupled receptor 6 (LGR6) in esophageal squamous cell carcinoma (ESCC) and normal esophageal tissues (NT) (Photo courtesy of Fujian Medical University).
Esophageal cancer is one of the most common malignant tumors in the world, and its incidence ranks seventh among those of all malignant tumors. Esophageal cancer can be divided into two pathological types: squamous cell carcinoma (SCC) and adenocarcinoma.

Leucine‐rich repeat‐containing G protein–coupled receptor (LGR) plays a pivotal role in adult stem cells, which are markers of various types of adult stem cells in the skin, nails, and a group of basal and intraluminal progenitors that induce luminal tumorigenesis. LGR6 can promote the self‐renewal and progression of non–small‐cell lung cancer and has strong carcinogenic potential.

The scientists reported that the expression of LGR6 in ESCC tissues was significantly higher than that in normal tissues and was negatively correlated with the differentiation degree of ESCC and the prognosis of the patients but not closely correlated with the Classification of Malignant Tumors (TNM) stage of ESCC. Protein‐protein interaction (PPI) networks showed that LGR6 had a close interaction with R-spondin-1 (RSPO1), RSPO2, RSPO3, and RSPO4. Kyoto encyclopedia of genes and genomes (KEGG) pathway analysis showed that LGR6 activated the Wnt/β‐catenin signaling pathway by binding with RSPO ligands to promote the progression of ESCC.

The authors concluded that the study confirmed for the first time that LGR6 is highly expressed in ESCC tissues and that increased expression of LGR6 is associated with a poor prognosis of ESCC patients. These findings provide a basis for the potential application of LGR6 as a biomarker for early diagnosis and as a target gene for early therapeutic intervention. The study was published on January 9, 2020 in the Journal of Clinical Laboratory Analysis.

Gestational diabetes mellitus (GDM) is a common pregnancy complication affecting 6%–15% of pregnancies globally. Although the condition resolves after delivery in most cases, women with a history of GDM... Read more

Addition of the inflammatory biomarker IL-6 (interleukin-6) to a standard panel of tumor markers was found to enchance immunodiagnosis of ovarian cancer. Ovarian cancer is one of the most common gynaecologic... Read more