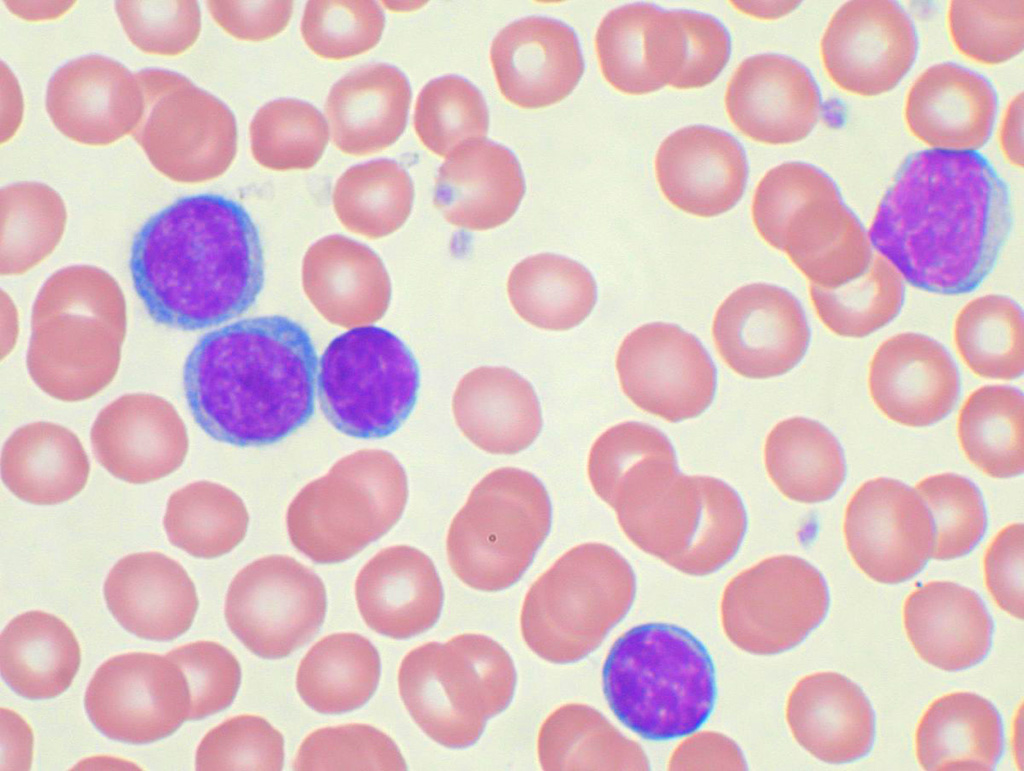 Image: Peripheral blood smear from a patient with chronic lymphocytic leukemia (CLL). The lymphocytes with the darkly staining nuclei and scant cytoplasm are the CLL cells (Photo courtesy of VashiDonsk).
Chronic lymphocytic leukemia (CLL) is the most common leukemia diagnosis in adults, with favorable outcomes in majority of patients and a 5-year survival of around 85%. A large proportion of CLL patients may never require treatment, requiring only ongoing surveillance.

As the population of CLL survivors grows, there is a need to understand their long-term health. It is known that nearly one in five cancers diagnosed currently occurs in an individual with a previous diagnosis of cancer, and these second primary malignancies (SPMs) are a leading cause of morbidity and mortality among cancer survivors.

Hematology-Oncology specialists at the Mayo Clinic (Jacksonville, FL, USA) and their colleagues used the Surveillance Epidemiology and End Results (SEER) database, and conducted a large, population-based analysis of SPMs occurring in CLL patients to better understand their trends and document the risk of specific SPMs according to patients’ demographic factors.

The investigators found that 6,487 new SPMs were diagnosed in about 270,000 person-years of follow-up, for a standardized incidence ratio (SIR) of 1.2. Higher risk was seen for both solid and hematologic malignancies (SIRs, 1.15 and 1.61, respectively). The highest risk for SPMs was seen between two and five months after CLL diagnosis (SIR, 1.57) and for patients aged 50 to 79 years. Compared with 1973 to 1982, there was a significant increase in SPMs in 2003 to 2015 (SIRs, 1.36 versus 1.19, respectively). CLL patients who had received prior chemotherapy had higher a risk for SPM (SIR, 1.38) compared with those untreated or those with treatment status unknown (SIR, 1.16). The risk for developing SPMs was increased among men, after chemotherapy, for recent years of diagnosis, for advanced age, and for nonwhites in multivariate analysis.

The team noted a significantly high rate of SPMs, both solid-organ and hematologic malignancies in patients with CLL as compared to age-matched USA population. The authors concluded that they had demonstrated trends in the incidence of SPMs among patients with CLL with a longer follow-up and a larger patient sample, thus building upon previously known data. This could inform further studies about the etiology of SPMs and help shape improved survivorship for patients with CLL. The study was published on September 30, 2019 in the Blood Cancer Journal.