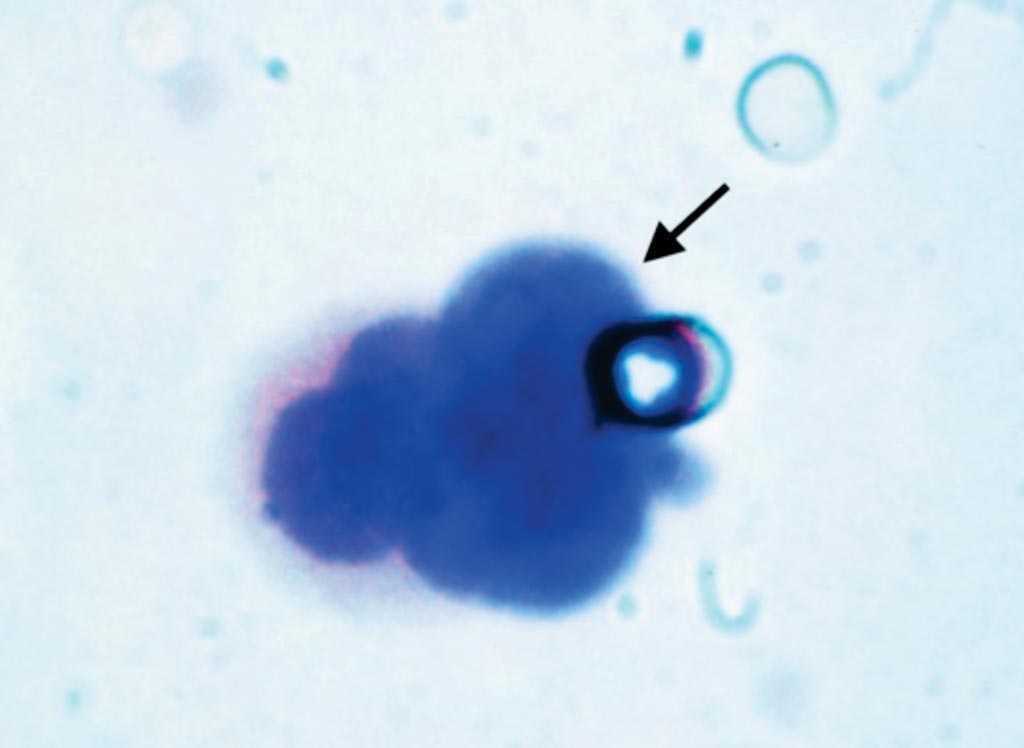 Image: A circulating tumor cell (arrow) diagnosed by the isolation by size of epithelial tumor cells (ISET) test (The pores of the filter are also visible) (Photo courtesy of Chichiselector).
Tumor cells circulating in blood are markers for the early detection and prognosis of cancer. However, detection of these cells is challenging because of their scarcity.

Scientists have now introduced an ultrasensitive method for the direct detection of circulating tumor cells in blood samples. It is based on the amplified, time-resolved fluorescence measurement of luminescent lanthanide ions released from nanoparticles that bind specifically to tumor cells.

Scientists at the Fujian Cancer Hospital (Fuzhou, China) and their colleagues produced antibodies against the epithelial cell adhesion molecule (EpCAM), which is a glycoprotein that is present in very high numbers on the surfaces of many tumor cells and acts as a diagnostic marker for cancer. These antibodies were applied as a coating in the wells of microplates, causing tumor cells contained in the blood sample to remain stuck deep in the wells as other blood components were removed.

The scientists coated the europium-containing nanoparticles with the same antibodies. This caused large numbers of the nanoparticles, added in solution, to specifically bind to the tumor cells. A subsequently added "developer" dissolved the nanoparticles, releasing myriad europium ions. These were immediately bound and tightly locked up by other components of the developer solution. This resulted in a manifold amplification of the fluorescence.

An essential advantage of this method is that europium ions are very long-lived fluorophores that continue to fluoresce for several microseconds after excitation with a flash of light. Because the measurements are time-resolved, it is possible to start the measurement with a delay. Background signals caused by the autofluorescence of cell components only continue for a few nanoseconds and fade before the measurement begins. This increases the sensitivity of the measurements, making it possible for the researchers to detect a single tumor cell per microplate well. The isolation by size of epithelial tumor cells (ISET) assay was conducted on a CTCBIOPSY device.

This enabled the direct detection of blood breast‐cancer cells with a limit of detection down to 1 cell/well of a 96‐well plate. Moreover, blood circulating tumor cells (CTCs) equal to or greater than 10 cells mL−1 can be detected in cancer patients with a detection rate of 93.9 % (14/15 patients). The authors envision that this ultrasensitive detection platform with excellent practicality may provide an effective strategy for early cancer diagnosis and prognosis evaluation. The study was first published online on July 8, 2019, in the journal Angewandte Chemie International Edition.