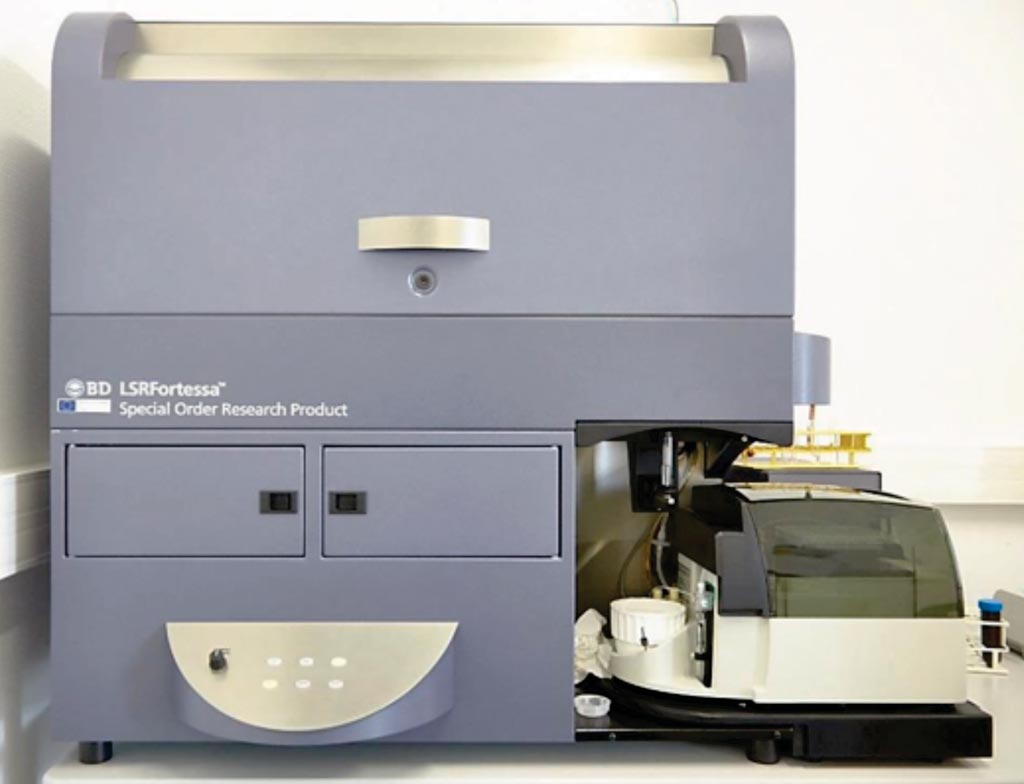 Image: The LSRFortessa flow cytometer instrument (Photo courtesy of BD Biosciences).
Mammalian tissues and organs preserve their structural and functional homeostasis by means of their supportive connective tissue, a three-dimensional network of cells and extracellular matrix (ECM) with different topological characteristics depending on the organ/tissue in which it is embedded.

An association has been discovered between a deficiency in the enzyme neuraminidase 1 (NEU1) and the build-up of connective tissue (fibrosis) in organs such as the muscle, kidney, liver, heart and lungs. Fibrosis includes life-threatening conditions such as idiopathic pulmonary fibrosis.

An international team of scientists working with the St. Jude Children’s Research Hospital (Memphis, TN, USA) addressed the potential involvement of NEU1 in human fibrosis, they first determined by Masson’s trichrome staining that the fibrotic disease seen in the muscle was a general phenotype of the Neu1−/− connective tissue in different organs. They checked tissue from 89 adults with idiopathic pulmonary fibrosis (IPF) and found NEU1 production was significantly down-regulated as compared to adults without the diagnosis.

Initially the team used a mouse model before confirming their results in human cells. Human lung fibroblasts from control individuals and patients with IPF were obtained and cultured. Fluorescence-activated cell sorting analyses of skeletal muscle connective tissue cells were performed using markers specific on an LSRFortessa flow cytometer instrument. Proliferation assays were performed and every 24 hours for 1 to 4 days and the optical density was read at 490 nm (OD490) with a FLUOstar Omega plate reader. Other methods used in the study included real-time quantitative polymerase chain reaction, immunohistochemistry, exosome isolation, sucrose gradient, proteomics, and size distribution.

The team found that mouse fibroblasts lacking NEU 1 release excessive numbers of molecules that degrade the extracellular matrix, as well as exosomes. The exosomes are loaded with factors that promote fibrosis, including the growth factor TGF-β and the signaling molecule WNT. Normal mouse and human fibroblasts cells were activated to proliferate and migrate when exposed to exosomes containing TGF-β, WNT and related molecules released by NEU1-deficient fibroblasts. The investigators checked an RNA sequencing database of 89 idiopathic pulmonary fibrosis patients and found NEU1 was among the most down-regulated of 66 genes included in the database.

Alessandra d'Azzo, PhD, the senior author of study said, “This is the first time NEU1 has been associated with fibrotic conditions. NEU1 is an important enzyme that breaks down sugar-containing molecules in many cells of the body, but it has not really been on the radar for adult health problems.” The authors concluded that their findings reveal an unexpected exosome-mediated signaling pathway downstream of NEU1 deficiency that propagates a fibrotic disease and could be implicated in idiopathic forms of fibrosis in humans. The study was published on July 17, 2019, in the journal Science Advances.