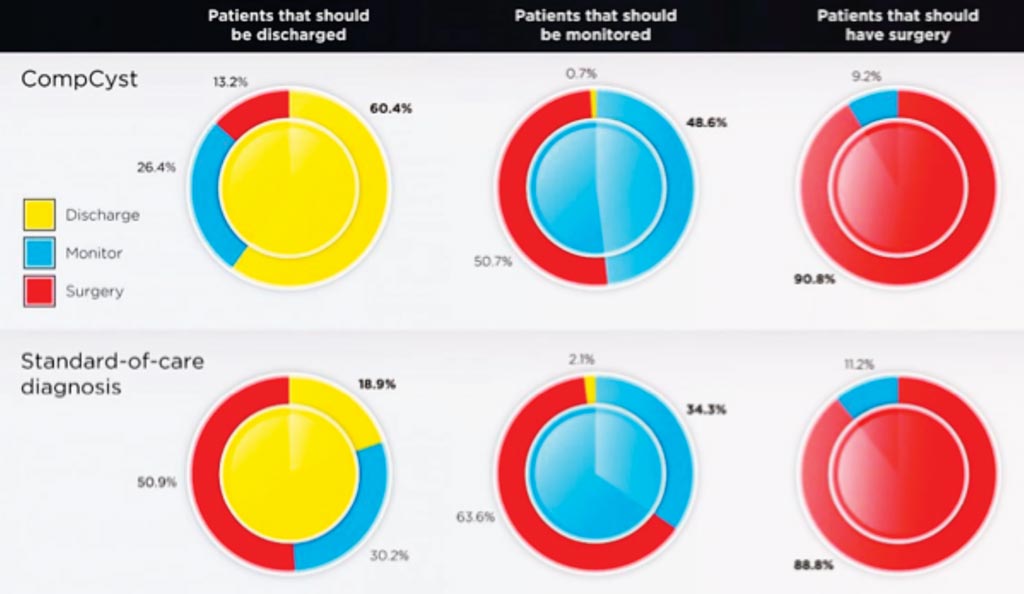 Image: The two sets of charts compare the recommendations for managing patients with pancreatic cysts based on either CompCyst or standard-of-care pathology (Photo courtesy of the American Association for the Advancement of Science).
Pancreatic cysts are common and often pose a management dilemma, because some cysts are precancerous, whereas others have little risk of developing into invasive cancers. Early, accurate detection of pancreatic cancer is a high priority.

As not all pancreatic cysts develop into cancer and they can be difficult to triage, leading to both missed diagnoses and unnecessary surgeries. In a proof-of-concept study, scientists have shown that a laboratory test using artificial intelligence tools has the potential to more accurately sort out which people with pancreatic cysts will go on to develop pancreatic cancers.

An international scientific team led by Johns Hopkins Kimmel Cancer Center (Baltimore, MD, USA) has shown that a laboratory test using artificial intelligence tools has the potential to more accurately sort out which people with pancreatic cysts will go on to develop pancreatic cancers. The team used information from more than 800 patients with pancreatic cysts who had cyst fluid analysis and cyst removal surgery at The Johns Hopkins Hospital and 15 other medical centers around the world.

The precise nature of the cysts examined was confirmed through histopathological analysis of resected surgical specimens. The cysts were then classified into three groups: those with no potential to turn cancerous, for which patients would not require periodic monitoring; mucin-producing cysts that have a small risk of progressing to cancer, for which patients can receive periodic monitoring for progression to possible cancer; and cysts for which surgery is recommended because there is a high likelihood of progression to cancer.

The team evaluated the molecular profiles, including DNA mutations and chromosome changes, of 862 of pancreatic cysts. They then fed the molecular information, along with clinical and radiologic data, into a computer-based program that used artificial intelligence to classify patients into the three groups noted previously. The program was called the CompCyst test was created with patient data including clinical impressions and symptoms, images from CT scans and molecular features such as DNA alterations within cyst fluid.

The scientists tested CompCyst in an independent cohort of 426 patients, with histopathology used as the gold standard. They found that clinical management informed by the CompCyst test was more accurate than the management dictated by conventional clinical and imaging criteria alone. Based on histopathological analysis of the surgically resected cysts, the investigators found that surgery was not needed for 45% of the patients that underwent surgery for their cysts. This unnecessary surgery was performed because the clinicians could not determine if the cysts were dangerous. In these patients, if CompCyst had been used, the team estimated that 60% to 74% of the patients (depending on the cyst type) could have been spared these unnecessary surgeries.

Christopher Wolfgang, MD, PhD, MS, a Professor of Surgery and a senior author of the study, said, “Currently available clinical and imaging tests often fail to distinguish precancerous cysts from cysts that have little or no potential to turn cancerous, which makes it difficult to determine which patients will not require follow-up and which patients will need long-term follow-up or immediate surgical resection. As a result, essentially all people diagnosed with a cyst are followed long-term. This study directly addresses these fundamental problems in management of pancreatic cysts.” The study was published on July 17, 2019, in the journal Science Translational Medicine.