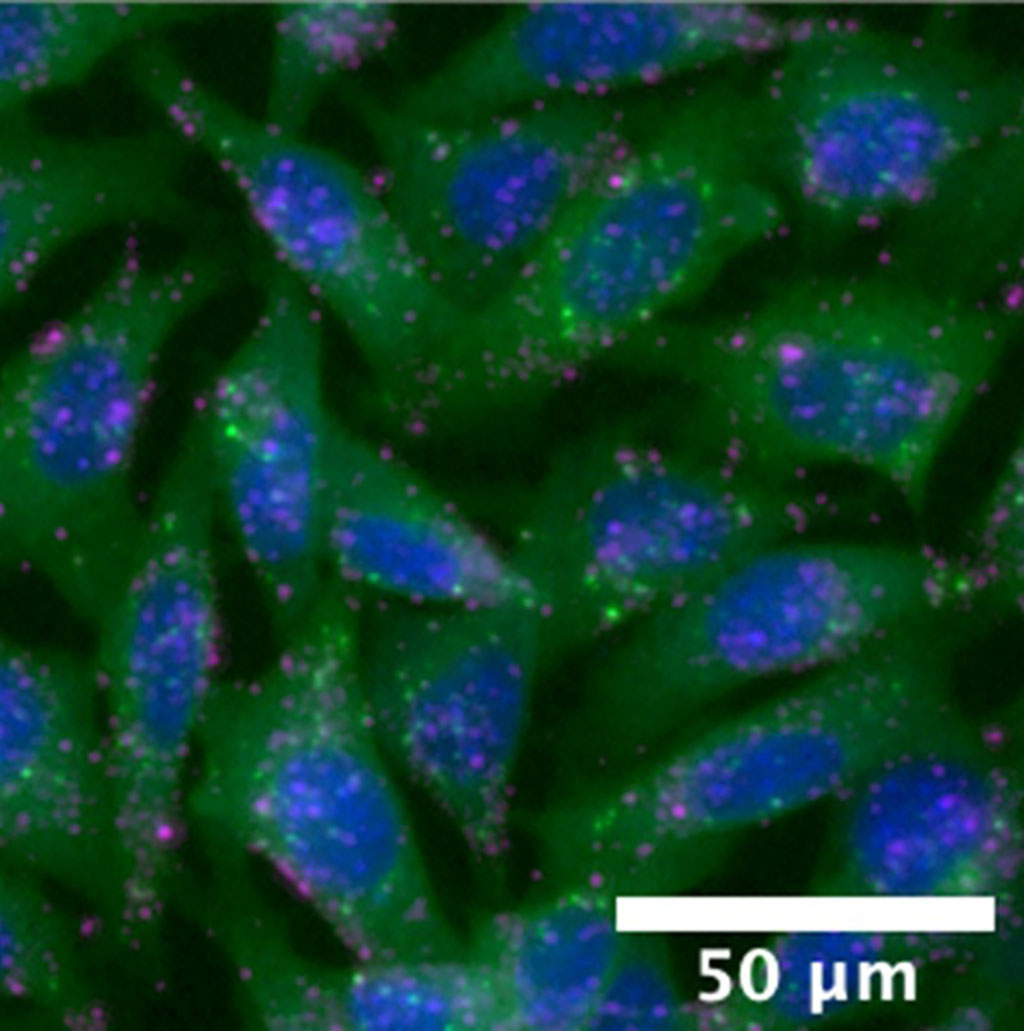 A color-coded test for new nanoparticles can quickly identify which formulations will effectively deliver the medicines they carry.

Researchers at Johns Hopkins Medicine (Baltimore, MD, USA) have developed a color-coded test that quickly signals whether newly developed nanoparticles - ultra small compartments designed to ferry medicines, vaccines and other therapies - deliver their cargo into target cells. Historically, nanoparticles have a very low delivery rate to the cytosol, the inside compartment of cells, releasing only about 1-2% of their contents. The new testing tool, engineered specifically to test nanoparticles, could advance the search for next-generation biological medicines. The technology builds upon nanoparticles currently used against cancer and eye disease, and in vaccines for viruses including SARS-CoV-2, the virus that causes COVID-19.

Previous research has estimated that only about 1-2% of nanoparticles “eaten” by cells are able to escape the cellular compartments that trap them to avoid being digested or “spit back out.” In addition to the properties of its cargo, a nanoparticle’s chemical properties determine whether it is accepted by a cell and able to evade its cellular defenses. To surmount such obstacles to final delivery, the researchers designed a screening tool that assesses hundreds of nanoparticle formulations on their ability to not just reach a cell, but also how efficiently the nanoparticle can escape with its cargo to reach a cell’s interior.

The test uses mouse cells grown in the laboratory that are genetically engineered to carry a florescent marker called Gal8-mRuby, which shines orange-red when a cellular envelope that engulfs a nanoparticle opens, releasing its cargo into the cell. Images of the process are then analyzed by a computer program that quickly tracks the nanoparticle location using red fluorescent light and quantifies how effective the nanoparticles are at being released into the cell by assessing the amount of orange-red fluorescent light, with detailed information about the uptake of the nanoparticles and the delivery of their cargo.

The researchers tested their tool in mouse cells grown in the laboratory as well as in living mice. In experiments in mice, the researchers administered biodegradable nanoparticles carrying mRNA that encoded a gene called luciferase, which makes cells glow. The researchers then tracked whether the mouse cells accepted the gene and began expressing it - lighting up target cells like a lightning bug. Green’s team found that the top-performing nanoparticles in the cellular tests had a high positive correlation to nanoparticle gene delivery performance in living mice, showing the nanoparticle assay is a good predictor of successful cargo delivery.

In further mouse studies, the researchers discovered that different chemical group combinations in the polymer-based nanoparticles led the nanoparticles to target different tissue types. By analyzing how the particles behaved in the mouse’s body, the researchers found that polymer chemical properties could direct the nanoparticle gene therapy to specific target cells, such as endothelial cells in the lungs or B cells in the spleen. Nanoparticle delivery of biological drugs is a growing field, particularly for gene therapies and vaccines.

“By fine-tuning small chemical changes, we can steer a nanoparticle to specific tissues and even specific cells,” said Jordan Green, Ph.D., professor of biomedical engineering at the Johns Hopkins University School of Medicine. “This would allow us to develop more precisely delivered therapies, which could improve both efficacy and safety.”