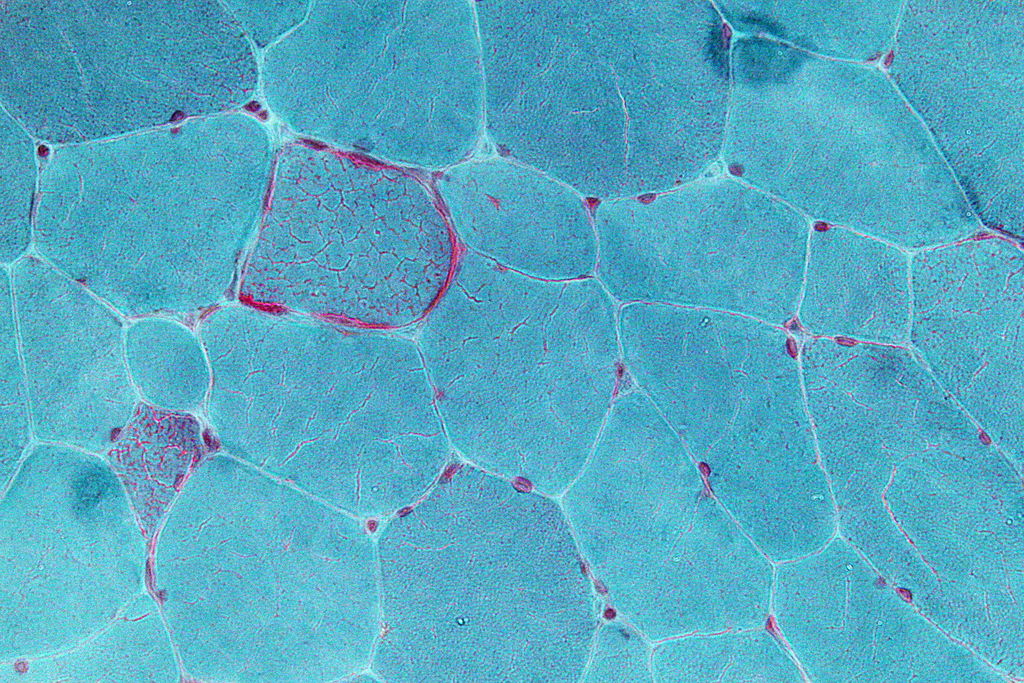 Image: Very high magnification micrograph of a muscle biopsy specimen showing ragged red fibers, a finding seen in various types of mitochondrial diseases (Photo courtesy of Wikimedia Commons)
A team of British researchers has demonstrated that a whole genome sequencing approach could identify patients with difficult to diagnose mitochondrial diseases and distinguish them from non-mitochondrial disorders.

Mitochondrial disorders are a common cause of inherited metabolic disease, affecting approximately 1 in 5000 people. They are caused by mutations in genes that primarily affect oxidative phosphorylation and ATP synthesis. Mitochondrial diseases take on unique characteristics both because of the way the diseases are often inherited and because mitochondria are so critical to cell function. Mitochondrial diseases are usually detected by analyzing muscle samples, where the presence of these organelles is higher. However, current genetic testing regimes fail to diagnose around 40% of patients, with major implications for patients.

In an effort to improve the diagnostics situation, investigators at the University of Cambridge (United Kingdom) and their colleagues at other institutions conducted a study to determine whether whole genome sequencing (WGS) could be used to define the molecular basis of suspected mitochondrial disorders.

For this study, the investigators performed short read whole genome sequencing on blood samples obtained from 345 patients with suspected mitochondrial disorders who were participants in the 100,000 Genomes Project in England between 2015 and 2018. The 100,000 Genomes Project was set up to embed genomic testing in the British National Health System, discover new disease genes, and make genetic diagnosis available for more patients.

Results obtained during the study revealed a definite or probable genetic diagnosis in 98/319 (31%) families, with an additional six (2%) possible diagnoses. Fourteen of the diagnoses (4% of the 319 families) explained only part of the clinical features. A total of 95 different genes were implicated. Of 104 families given a diagnosis, 39 (38%) had a mitochondrial diagnosis and 65 (63%) had a non-mitochondrial diagnosis.

The results showed that WGS was a useful diagnostic test in patients with suspected mitochondrial disorders, yielding a diagnosis in a further 31% after exclusion of common causes. Most diagnoses were non-mitochondrial disorders and included developmental disorders with intellectual disability, epileptic encephalopathies, other metabolic disorders, cardiomyopathies, and leukodystrophies. If a targeted approach had been taken, these diagnoses would have been missed.

Senior author Dr. Patrick Chinnery, professor of neurology at the University of Cambridge, said, “We recommend that whole genome sequencing should be offered early and before invasive tests such as a muscle biopsy. All that patients would need to do is have a blood test, meaning that this could be offered across the whole country in an equitable way. People would not need to travel long distances to multiple appointments, and they would get their diagnosis much faster.”

Considering that the majority of diagnoses were of non-mitochondrial disorders, Dr. Chinnery said, “These patients were referred because of a suspected mitochondrial disease and the conventional diagnostic tests are specifically for mitochondrial diseases. Unless you consider these other possibilities, you will not diagnose them. Whole genome sequencing is not restricted by that bias.”

The study was published in the November 4, 2021, online edition of the journal BMJ.