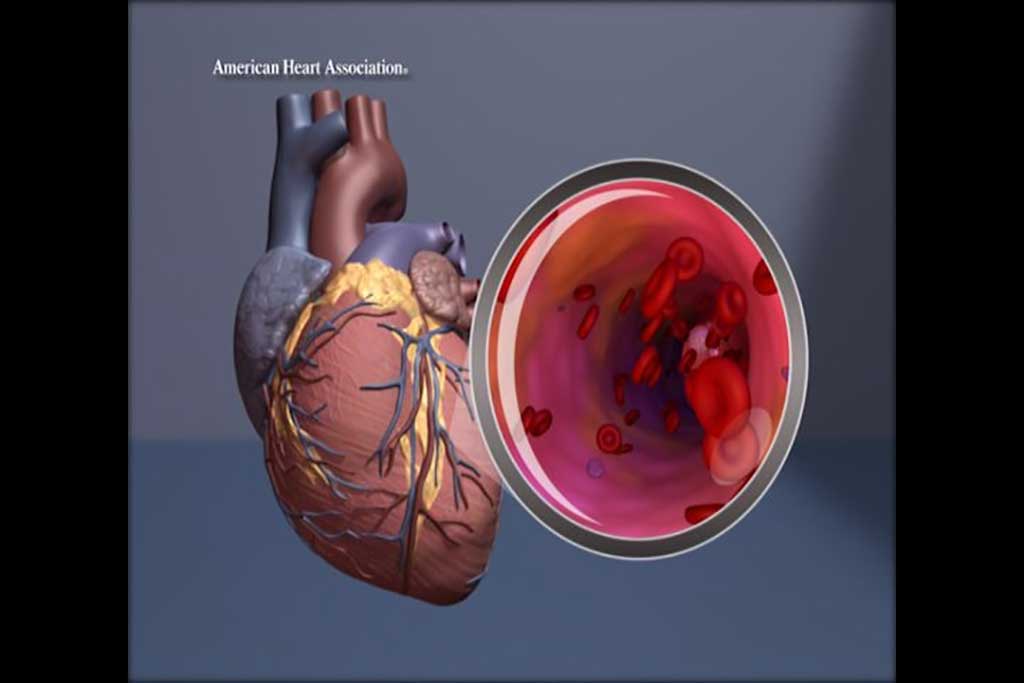 Image: Illustration of the heart with magnification of the artery (Photo courtesy of American Heart Association)
A recent report identified novel genetic associations for abdominal aortic aneurysm (AAA) with therapeutic implications and identified a subset of the population at significantly increased genetic risk of AAA that was independent of family history.

AAA is a localized enlargement of the abdominal aorta such that the diameter is greater than three centimeters or more than 50% larger than normal. They usually cause no symptoms, except during rupture. Rupture may result in pain in the abdomen or back, low blood pressure, or loss of consciousness, and often results in death. AAAs occur most commonly in men over 50 years old, and among those with a family history. Additional risk factors include smoking, high blood pressure, and other heart or blood vessel diseases. AAAs are the most common form of aortic aneurysm. In the United States, screening with abdominal ultrasound is recommended for males between 65 and 75 years of age with a history of smoking. The genetic determinants of AAA remain incompletely defined. In total, 10 previously identified risk loci explain only a small fraction of the inheritance of AAA.

Investigators at Stanford University (Palo Alto, CA, USA) and a large number of collaborators from other institutions performed a genome-wide association study (GWAS) on samples obtained from the Million Veteran Program. This program, which was initiated in 2011 and is now one of the world's largest genetic biobanks, was designed to promote the study of how genes affect the health of United States military veterans.

For the current study, the investigators performed a GWAS on nearly 18 million DNA sequence variants with AAA (7,642 cases and 172,172 controls) in veterans of European ancestry with independent replication in up to 4,972 cases and 99,858 controls. They then used Mendelian randomization to examine the causal effects of blood pressure on AAA. In addition, they examined the association of AAA risk variants with aneurysms in the lower extremity, cerebral, and iliac arterial beds, and derived a genome-wide polygenic risk score (PRS) to identify a subset of the population at greater risk for the disease.

Results revealed 14 novel genetic loci, bringing the total number of known significant AAA loci to 24. A genetic-linked increase of 10 millimeters of mercury (Hg) in diastolic blood pressure increased the risk of developing abdominal aortic aneurysm. Analysis showed further that 19 of the 24 risk loci for AAA were associated with aneurysms in other parts of the body. A 29-variant PRS was strongly associated with AAA, independent of family history and smoking risk factors. Using this PRS, the investigators identified a subset of the population with AAA prevalence greater than that observed in screening trials performed according to current guidelines.

The AAA study was published in the September 28, 2020, online edition of the journal Circulation.