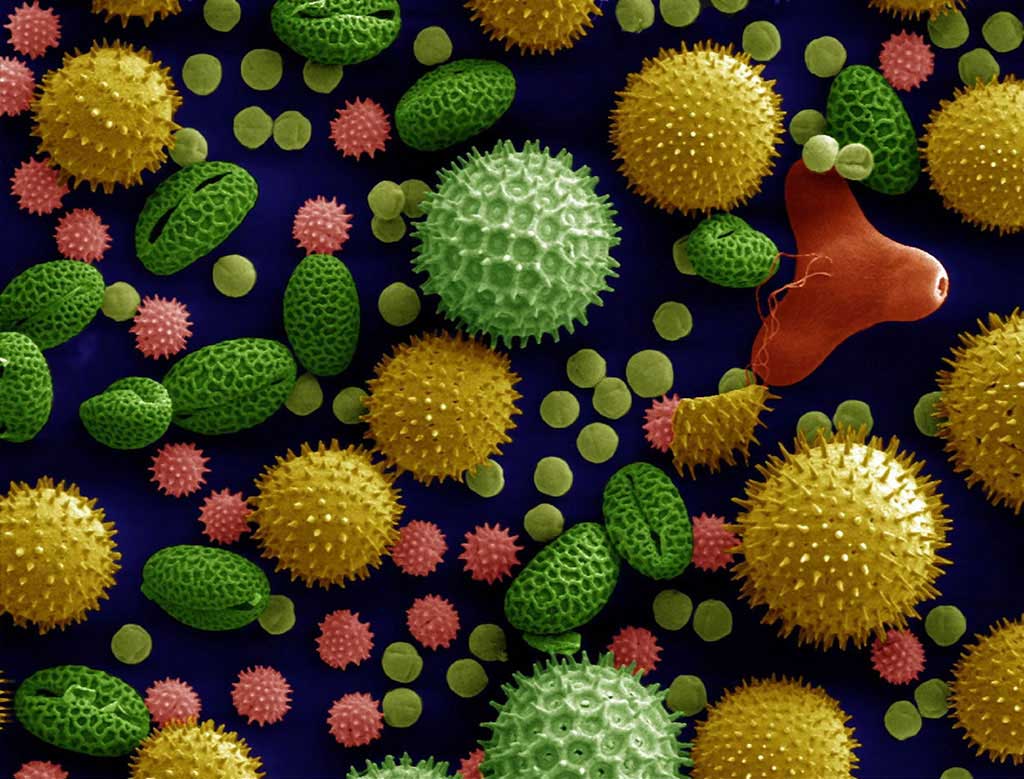 Image: Scanning electron microscope image (500x magnification) of pollen grains from a variety of common plants (Photo courtesy of Dartmouth Electron Microscope Facility, Dartmouth College (via Wikimedia Commons)
A team of German researchers has identified a panel of biomarkers that predicts the severity of allergic symptoms even before the start of the pollen season.

In addition to physical symptoms such as sneezing, rhinitis, and watery eyes pollen exposure induces local and systemic allergic immune responses in sensitized individuals. The kinetics of symptom expression under natural pollen exposure have never been systematically studied, especially in subjects without allergy.

Subjects were monitored over a period of one year. In addition to a digital symptom diary kept daily by the study participants, the investigators analyzed samples of blood and nasal secretions. They then compared immune variables (cytokines, chemokines, and pollen-specific immunoglobulins) in samples obtained during and after the pollen season.

Results revealed that allergic symptoms appeared following exposure to concentrations of airborne pollen in subjects with SAR with a time lag between 0 and 13 days depending on the pollen type. Of the seven nonallergic subjects four also exhibited in-season symptoms whereas three did not. Cumulative symptoms in those without allergy were lower than in those with SAR but followed pollen exposure with similar kinetics. Principal component analysis and Spearman correlations identified nasal levels of IL-8, IL-33, and Betula verrucosa 1-specific IgG4 (sIgG4) and Betula verrucosa 1-specific IgE antibodies as predictive for seasonal symptom severity.

First author Mehmet Gökkaya, a researcher at the Helmholtz Zentrum München - German Research Center for Environmental Health, said, "The identification of biomarkers helps us in three ways. Firstly, by predicting the severity of nasal symptoms we can better identify the patients who benefit the most from therapeutic treatment. Secondly, biomarkers can help us understand the processes at work during the development of allergies in non-allergic patients and so help us to be ultimately able to prevent them. And thirdly, biomarkers can be used to identify the physiological processes that originally cause these symptoms. Possibly this could be a new starting point for the development of novel therapeutics."

The study was published in the April 6, 2020, online edition of the Journal of Allergy and Clinical Immunology.