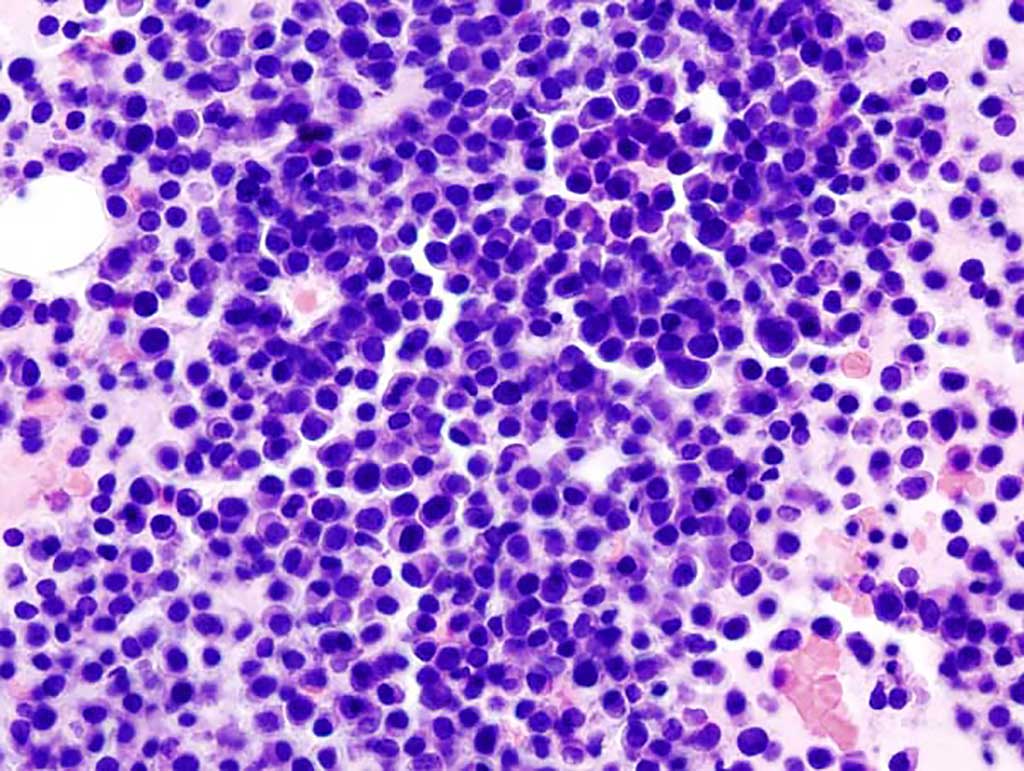 Image: Histopathological image of multiple myeloma from a bone marrow aspirate (Photo courtesy of Wikimedia Commons)
Combining two panels of genetic biomarkers enabled cancer researchers to identify multiple myeloma patients at “ultra high risk” of progression of the disease and probable lack of response to lenalidomide, the primary drug used to treat it.

Investigators at the Institute of Cancer Research (London, United Kingdom) and their colleagues were seeking genetic signatures that would enable them to identify ultra high risk multiple myeloma patients. This effort involved analysis of the genomes of cancers obtained from 329 patients from across the United Kingdom who were participating in the phase III Cancer Research UK Myeloma XI trial, which evaluated the effectiveness of a range of targeted drugs, including lenalidomide.

Results revealed that 81 of the patients had cancers with the “SKY92” signature, a pattern of gene activity involving 92 genes linked to high-risk status. Patients with cancers that carried the SKY92 high risk gene expression signature had an up to three-fold increased risk of their cancer recurring early. Those with heavily genetically mutated (double-hit) cancers had a two-fold increased risk of death.

Senior author Dr. Martin Kaiser, teamleader in myeloma molecular therapy at The Institute of Cancer Research, said, “Our study shows that people whose tumors have an “ultra high risk” combination of genetic features have particularly aggressive disease which does not respond sufficiently to standard treatment to keep their cancer at bay. Testing for high-risk genetic features could help target myeloma treatment, focusing on the specific needs of each patient. Not all patients with myeloma are the same, and we know that by better understanding their cancer's genetic and molecular features, we can tailor their treatment much more effectively.”

The multiple myeloma study was published in the March 11, 2020, online edition of the journal Leukemia.