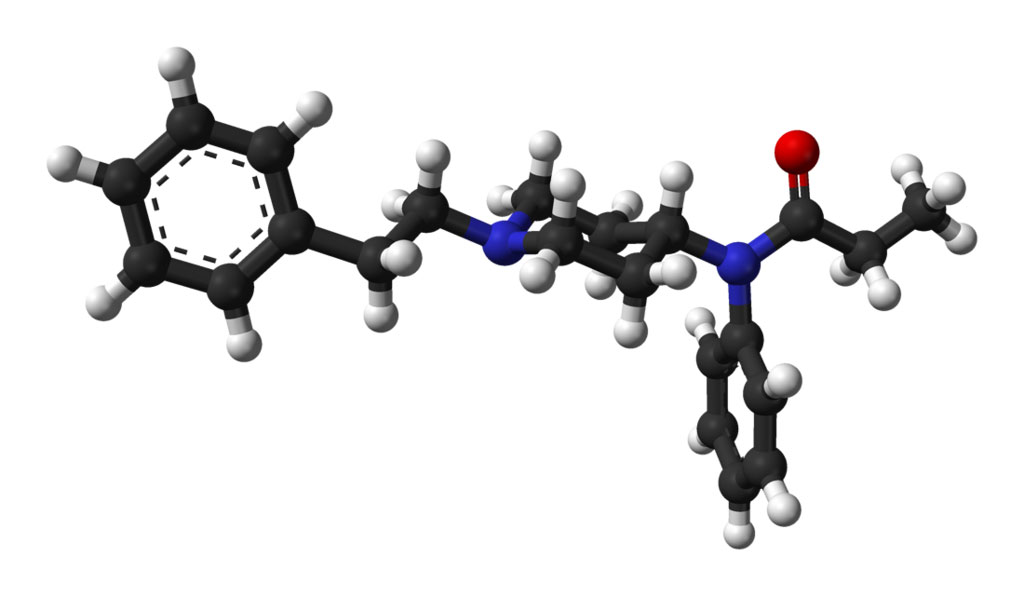 Image: Ball-and-stick model of the fentanyl molecule in the crystal structure of fentanyl citrate-toluene solvate (Photo courtesy of Wikimedia Commons)
A recently introduced diagnostic test for use on clinical chemistry autoanalyzers measures the levels of the opioid drug fentanyl and its primary metabolite norfentanyl.

Fentanyl is a synthetic opioid similar to morphine, prescribed for patients with chronic pain, post-operative pain, or treatment of breakthrough pain in cancer patients. The [U.S.] Centers for Disease Control and Prevention has described fentanyl as being a synthetic opioid that is 50 times more potent than heroin and 100 times more potent than morphine.

There are two types of fentanyl: pharmaceutical fentanyl is prescribed to manage severe pain in cancer and surgical patients and end-of-life palliative care. Non-pharmaceutical fentanyl, or illicitly manufactured fentanyl, is often mixed with heroin and/or cocaine - with or without the user’s knowledge. Addictive cocktails incorporating illicitly manufactured fentanyl have evolved into the leading cause of drug overdose death.

When consumed, fentanyl is metabolized to norfentanyl and other metabolites. About 90% of the dose is excreted in urine as norfentanyl, while parent fentanyl accounts for less than 7%.

Siemens Healthineers (Erlangen, Germany) is now distributing the ARK Fentanyl Assay, which provides laboratories with a greater window to screen for fentanyl. The ARK Fentanyl Assay is 510(k) approved for diagnostic use by the [U.S.] Food and Drugs Administration and is CE Marked for use in Europe. The assay measures nanogram per milliliter levels of fentanyl and norfentanyl in 23 microliter urine samples and generates results after only seven minutes. It is available for automated clinical chemistry analyzers offered by Siemens Healthineers including on the Atellica Solution, Viva Systems, Dimension and Dimension Vista Systems.

“Fentanyl testing provides necessary clinical information for more effective patient care where a gap currently exists. Adding the ARK Fentanyl Assay to the Atellica Solution menu offers laboratories an extensive drugs-of-abuse testing menu which can be run efficiently on a single instrument,” said Dr. Deepak Nath, president of laboratory diagnostics at Siemens Healthineers. “It also empowers laboratories to help identify exposure and addiction in their communities, and aid clinicians in getting patients on the path to treatment.”