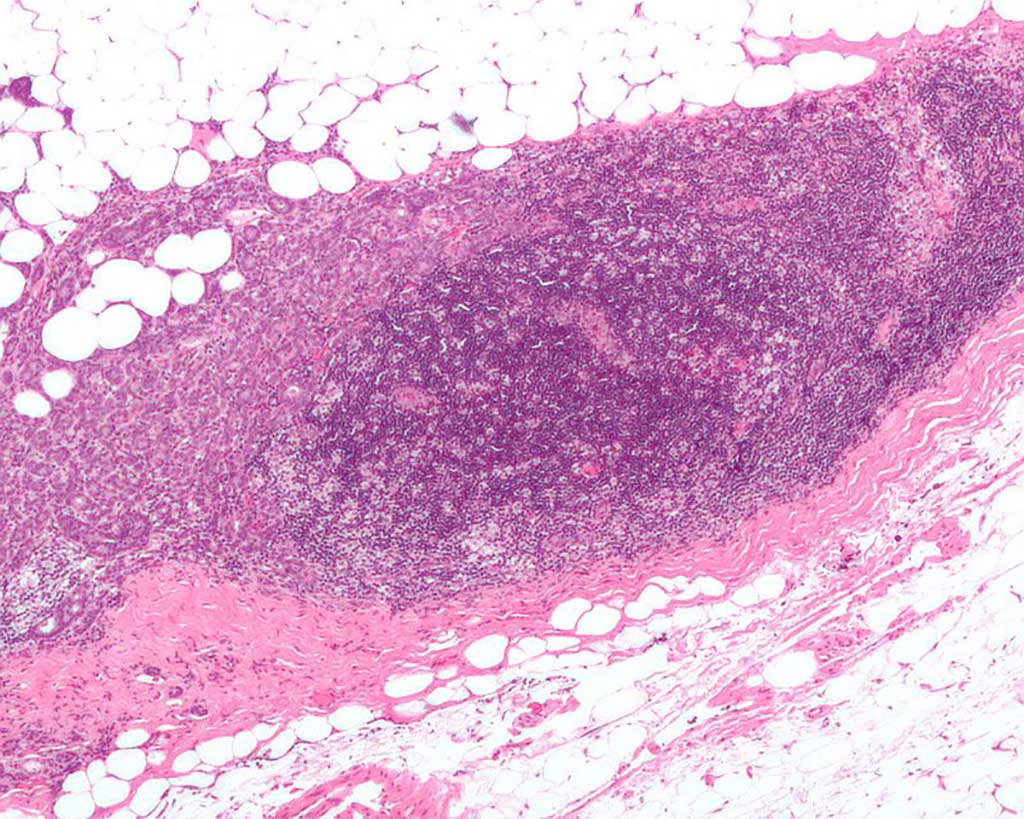 Image: Micrograph showing a lymph node invaded by ductal breast cancer and with extranodal extension of the tumor. The dark purple (center) shows lymphocytes (part of a normal lymph node). Surrounding the lymphocytes and extending into the surrounding fat (top of image) is the ductal breast cancer (Photo courtesy of Wikimedia Commons)
A large multinational study identified more than 350 DNA variants associated with the more than 150 regions of the genome known to be linked to the risk for developing breast cancer.

Investigators at more than 450 departments and institutions worldwide, including the University of Cambridge (United Kingdom) and the Wellcome Sanger Institute (Hinxton, United Kingdom), collaborated to compare the DNA of 110,000 breast cancer patients against that of some 90,000 healthy controls.

Previous genome-wide association studies (GWAS), which compared the DNA of patients against that of healthy controls, found around 150 regions of the genome that clearly affected breast cancer risk. The use of advanced gene mapping techniques in the current study enabled investigators to identify 352 risk variants within these regions. So far, it is not yet clear how many genes these variants target, but the investigators have identified 191 genes with reasonable confidence.

In the majority of cases, the variants affected gene expression, how active a particular gene was and how much of a particular protein it created, rather than altering the type of protein coded by the gene. Of the newly-discovered genetic variants, about a third predispose women towards developing hormone-responsive breast cancer, the type of disease found in 80% of breast cancer patients. These tumors respond to hormonal treatments such as tamoxifen. In contrast, 15% of the genetic variants predispose women to the rarer estrogen-receptor-negative type of breast cancer.

"We know from previous studies that variants across our DNA contribute towards breast cancer risk, but only rarely have scientists have been able to identify exactly which genes are involved," said first author Dr. Laura Fachal researcher in human genetics at the Wellcome Sanger Institute. "We need this information as it gives us a better clue to what is driving the disease and hence how we might treat or even prevent it."

"This incredible haul of newly-discovered breast cancer genes provides us with many more genes to work on, most of which have not been studied before," said senior author Dr. Alison Dunning, reader in molecular cancer genetics at the University of Cambridge. "It will help us build up a much more detailed picture of how breast cancer arises and develops. But the sheer number of genes now known to play a role emphasizes how complex the disease is."

The breast cancer genome-wide association study was published in the January 7, 2020, online edition of the journal Nature Genetics