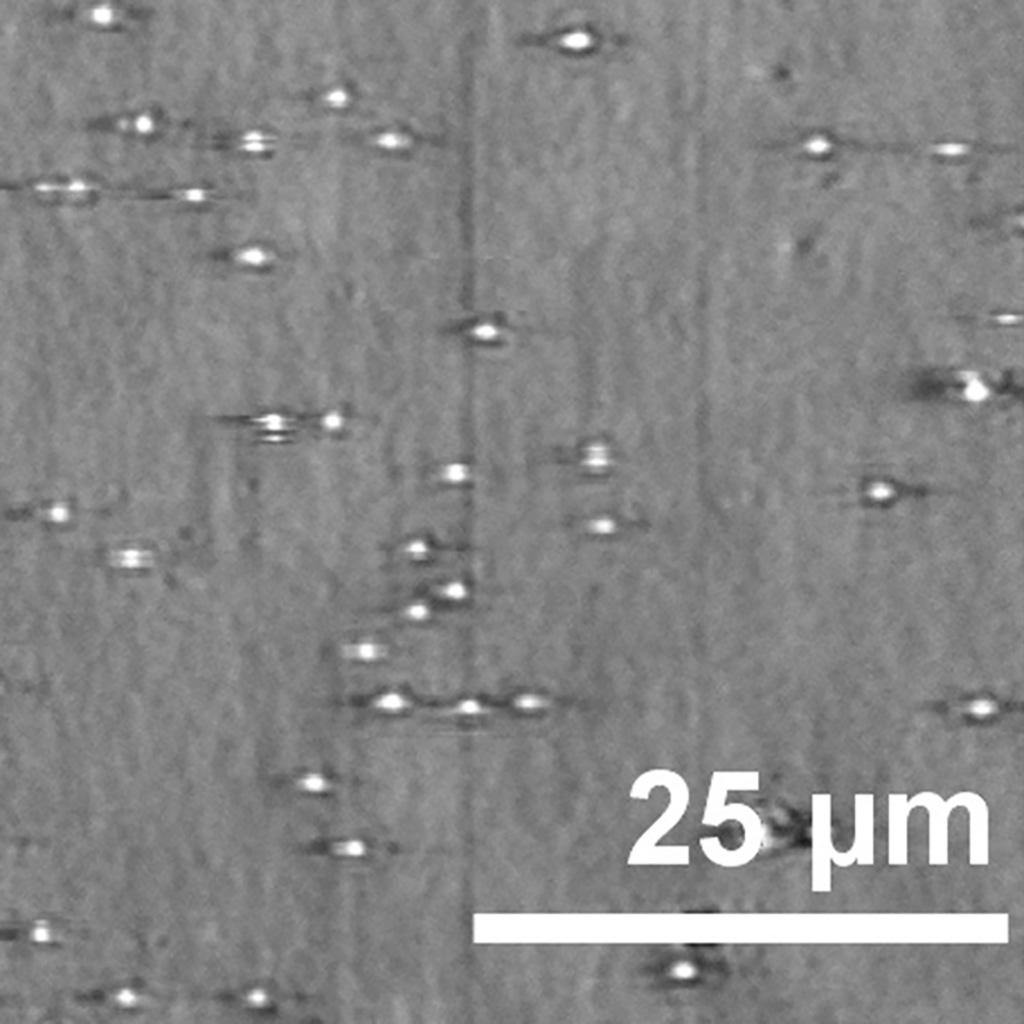 Image: Each dot seen in this PRAM image represents one microRNA that has bound to the sensor (Photo courtesy of Nantao Li, University of Illinois)
The potential usefulness of the “liquid biopsy” approach for detection of cancer biomarkers in the blood has been increased by the development of a method for capturing and counting cancer-associated microRNAs.

Highly selective and sensitive detection of microRNAs is a key challenge for those interested in developing liquid-biopsy approaches. Technologies that can achieve high diagnostic performance without the requirement of complicated processing steps or expensive equipment will be necessary for the technique to be available for general clinical use.

With these features in mind, investigators at the University of Illinois (Urbana-Champaign, USA) developed a digital-readout microRNA diagnostic procedure that relied on microRNA-activated nanoparticle-photonic crystal hybrid coupling. This procedure, which they called PRAM (Photonic Resonator Absorption Microscopy) was designed for the capture and quantification of microRNA biomarkers in samples of blood or serum.

PRAM works by combining a gold nanoparticle probe with a photonic crystal sensor. The probe specifically pairs to a designated microRNA and has a protective cap that becomes displaced when the molecule locates and binds to the target biomarker. The exposed end of the probe then binds to the photonic crystal (PC) biosensor surface. By matching the surface plasmon-resonant wavelength of the nanoparticle probe to the resonant wavelength of the PC nanostructure, the reflected light intensity from the PC is dramatically and locally quenched by the presence of each individual nanoparticle, each positive response produces a signal visible through a microscope.

"Cancer cells contain gene mutations that enable them to proliferate out of control and to evade the immune system, and some of those mutations turn up in microRNAs," said senior author Dr. Brian Cunningham, professor of electrical and computer engineering at the University of Illinois. "There are specific microRNA molecules whose presence and concentration is known to be related to the presence and aggressiveness of specific types of cancer, so they are known as biomarkers that can be the target molecule for a diagnostic test."

"This approach makes the idea of performing a “liquid biopsy” for low-concentration cancer-related molecules a step closer to reality," said Dr. Cunningham. "This advance demonstrates that it is possible to have an inexpensive and routine method that is sensitive enough to require only a droplet of blood. The results of the test might tell a physician whether a regimen of chemotherapy is working, whether a person's cancer is developing a new mutation that would make it resistant to a drug, or whether a person who had been previously treated for cancer might be having a remission."

Details of the PRAM procedure were published in the September 24, 2019, issue of the journal Proceedings of the [U.S.] National Academy of Sciences.