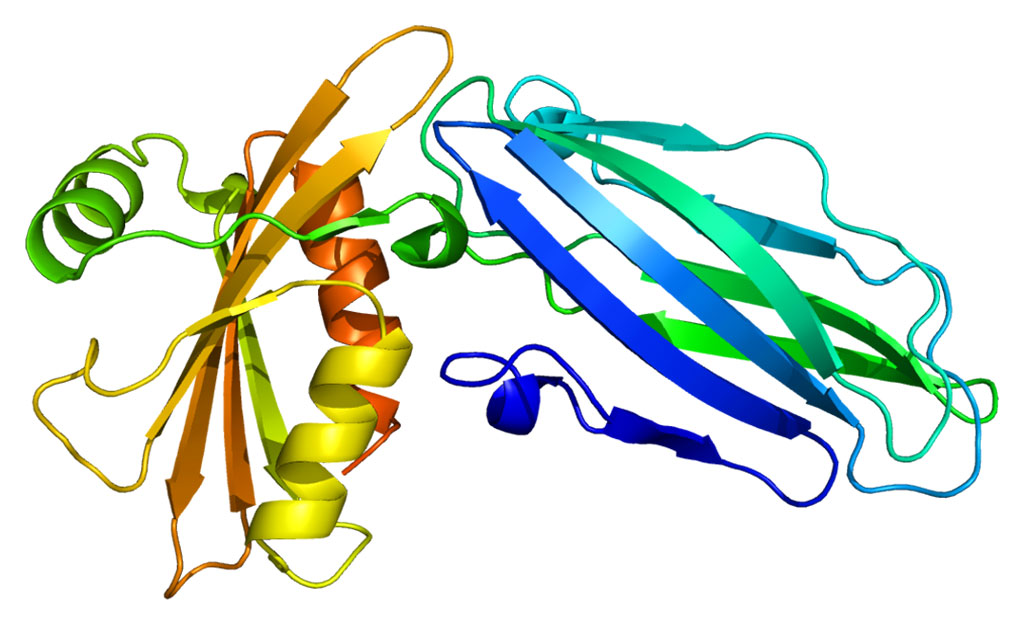 Image: Structure of the AP2A2 protein (Photo courtesy of Wikimedia Commons)
Researchers have discovered evidence of a novel genetic variation linked to the development of late-onset Alzheimer’s disease (AD).

Late-onset Alzheimer’s disease (LOAD) is a common complex disorder of old age. Though these types of disorders can be highly heritable, they differ from single-gene (Mendelian) diseases in that their causes are often multi-factorial with both genetic and environmental components. Genetic risk factors that have been firmly implicated are mutations in the amyloid precursor protein (APP), presenilin 1 (PSEN1) and presenilin 2 (PSEN2) genes, which are found in large multi-generational families with an autosomal dominant pattern of disease inheritance, the apolipoprotein E (APOE) epsilon 4 allele and the sortilin-related receptor (SORL1) gene.

Environmental factors that have been associated with late-onset Alzheimer’s disease include depressive illness, various vascular risk factors, level of education, head trauma, and estrogen replacement therapy. This complexity may help explain their high prevalence from an evolutionary perspective, but the etiologic complexity makes identification of disease-related genes much more difficult. The “endophenotype” approach is an alternative method for measuring phenotypic variation that may facilitate the identification of susceptibility genes for complexly inherited traits.

The locus of interest was a poorly annotated region of the exome (the protein-coding DNA within the genome) with unique tandem repeats, largely unreadable by existing sequencing methods. Therefore, the investigators performed additional studies including PCR-based characterization of the tandem repeat-containing region in a cohort of autopsied individuals. Those results were correlated with LOAD pathological endophenotypes, and augmented by immunohistochemical analyses from LOAD cases and non-AD control brains.

The investigators reported finding evidence of LOAD-linked genetic variation within an exon of the Mucin 6 (MUC6) gene, and approximately 4000 base pairs downstream from another gene that encodes Adaptor Related Protein Complex 2 Subunit Alpha 2 (AP2A2).

PCR analyses on genomic DNA samples confirmed that the size of the MUC6 variable number tandem repeat (VNTR) region was highly polymorphic, and the size of the polymorphic region was associated with the severity of pTau pathology in the neocortex. AP2A2 expression was lower in a subset analysis of brain samples from persons with longer versus shorter VNTR regions, and AP2A2 was often co-localized with neurofibrillary tangles in LOAD.

Senior author Dr. Peter Nelson, professor of neuropathology at the University of Kentucky, said, "Our findings were made in a group of patients that is relatively small for a genetics study - some recent studies included hundreds of thousands of research subjects! That small sample size means two things: first, we should exercise caution and we need to make sure the phenomenon can be replicated in other groups; and second, it implies that there is a very large effect size - the genetic variation is strongly associated with the disease."

The study was published in the November 4, 2019, online edition of the Journal of Neuropathology & Experimental Neurology.