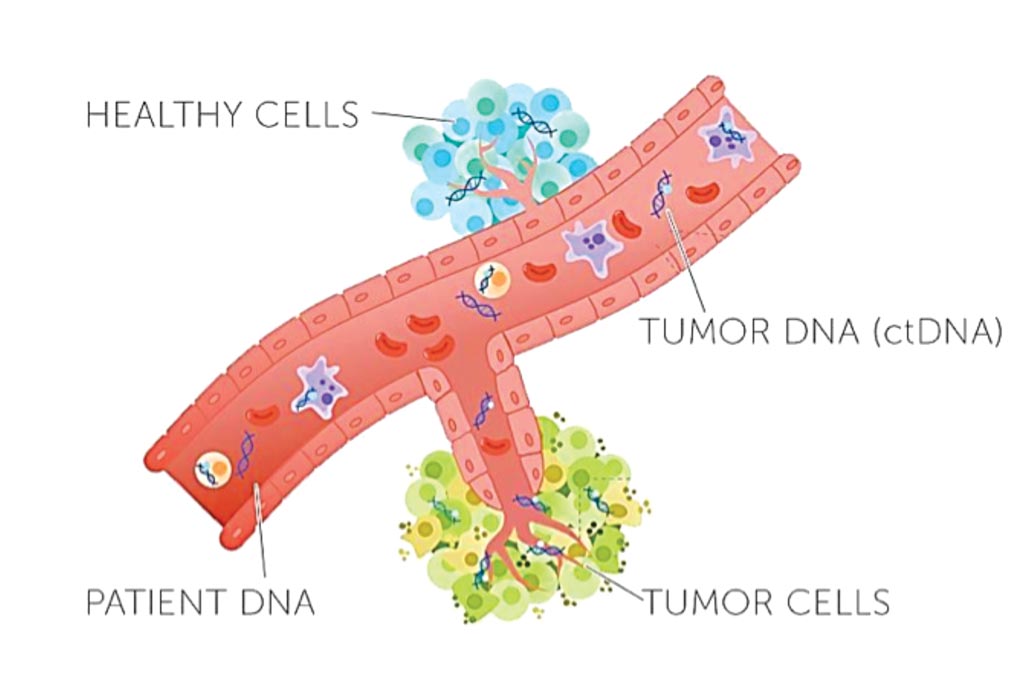 Image: Blood tests can sample circulating DNA cast off by solid tumors, providing information about the tumor and its likely response to treatment without the need for an invasive tumor biopsy (Photo courtesy of Rachel June Wong).
By analyzing circulating tumor DNA (ctDNA) samples after treatment, it may be possible to identify stage III colon cancer patients who are at increased risk of relapse and disease progression.

Medical Practitioners at the Walter and Eliza Hall Institute of Medical Research (Melbourne, Australia) and their colleagues in a multicenter, Australian, population-based cohort biomarker study recruited 100 consecutive patients with newly diagnosed stage III colon cancer planned for 24 weeks of adjuvant chemotherapy from November 1, 2014, through May 31, 2017. Median duration of follow-up was 28.9 months (range, 11.6-46.4 months). Physicians were blinded to ctDNA results. Data were analyzed from December 10, 2018, through June 23, 2019.

The team detected ctDNA in blood samples collected after surgery in 20 of the stage III patients, or 21% of those included in the study. For 17 patients, the ctDNA persisted even after adjuvant chemotherapy. When they compared recurrence-free survival intervals in individuals with or without ctDNA at these points in the treatment process, they estimated that just 30% of patients with ctDNA in their blood post-chemotherapy would be recurrence-free after three years, compared with some 77% of patients who did not have detectable ctDNA with the Safe-SeqS after chemotherapy.

The authors concluded that their results suggested that ctDNA analysis after surgery is a promising prognostic marker in stage III colon cancer. Post-chemotherapy ctDNA analysis may define a patient subset that remains at high risk of recurrence despite completing standard adjuvant treatment. This high-risk population presented a unique opportunity to explore additional therapeutic approaches. The study was published on October 17, 2019, in the journal JAMA Oncology.