Concussive Injuries Diagnosed by Measuring a Brain Protein in Blood 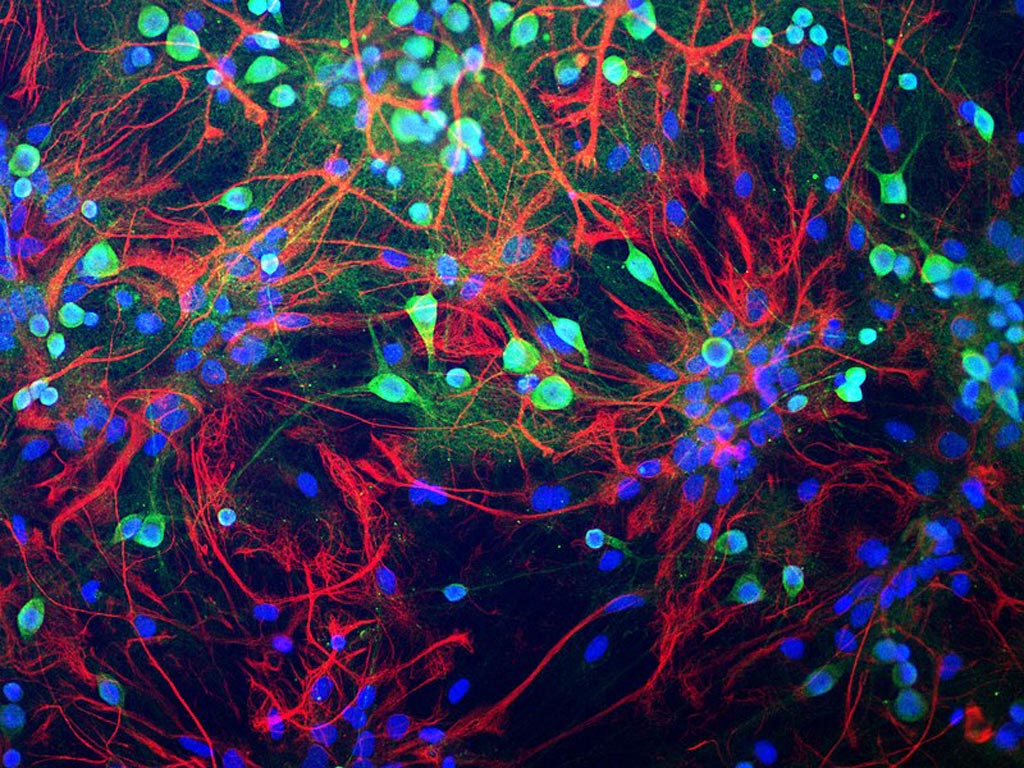 Image: Neurons from rat brain tissue stained green with antibody to ubiquitin C-terminal hydrolase L1 (UCH-L1), which highlights the cell body strong and the cell processes more weak. Astrocytes are stained in red with antibody to the GFAP protein found in cytoplasmic filaments. Nuclei of all cell types are stained blue with a DNA binding dye (Photo courtesy of Wikimedia Commons).
A simple blood test detects brain injury by measuring the levels of two brain proteins, which are released into the circulation following head trauma.

Elevated levels of both proteins are found in patients with nonconcussive head trauma, potentially signaling a subconcussive brain injury. To formalize a clinical role for these biomarkers, investigators at Orlando Health (FL, USA) evaluated the diagnostic accuracy of the serum glial and neuronal serum biomarkers glial fibrillary acidic protein (GFAP) and ubiquitin C-terminal hydrolase (UCH-L1). Levels of these proteins were determined both individually and in combination for their efficacy in detecting the presence of a concussion and for grading potential subconcussive and non-concussive brain injury in pediatric and adult trauma patients.

For the current study, blood samples were obtained from pediatric and adult trauma patients of all ages presenting with normal mental status within four hours of injury. Of 3462 trauma patients screened, 751 were enrolled for the study and 712 had relevant biomarker data. Repeated blood sampling was conducted at regular periods from four to 180 hours postinjury in adults.

The outcome of the study confirmed that GFAP outperformed UCH-L1 in detecting concussion in both children and adults. Blood levels of GFAP and UCH-L1 showed incremental elevations across three injury groups: from non-concussive body trauma, to non-concussive head trauma, to concussion. However, UCH-L1 was expressed at much higher levels than GFAP in those with non-concussive trauma, particularly in children.

"It is estimated that up to 3.8 million concussions occur in the U.S. annually from organized and recreational sports - and there are more than two million ER visits for traumatic brain injuries and concussions," said senior author Dr. Linda Papa, specialist in emergency medicine at Orlando Health. "It is a significant health problem in both athletes and non-athletes. This study includes an array of patients with different injury mechanisms, including car crashes, falls, and bicycle accidents in addition to recreational and sports injuries. It is not limited to just one group of injury types. A unique feature of this study is that it includes patients who hit their heads but have no symptoms. This group is rarely - if ever - included in biomarker studies."

The study was published in the August 25, 2019, online edition of the journal BMJ Paediatrics Open.