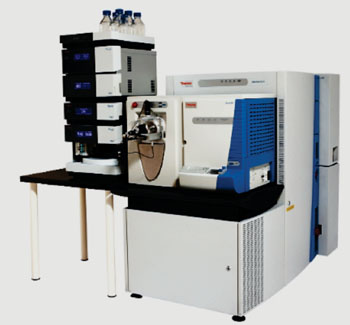 Image: The LTQ Orbitrap Elite mass spectrometer (Photo courtesy of Thermo Scientific).
A novel genetic biomarker has been identified responsible for the progression of many breast and prostate cancers and these finding could bolster efforts to better identify patients who respond to certain types of chemotherapy drugs that attack the most aggressive forms of cancer.

Metastatic dissemination is a multistep process that involves cell migration, invasion and growth at distant sites and the “amoeboid” phenotype has emerged as a migratory mechanism that facilitates metastasis. Amoeboid behavior is prominent at the invasive front of tumors, confers rapid migration rates and enables survival within the vasculature.

Scientists at Cedars-Sinai Medical Center (Los Angeles, CA, USA) and their colleagues investigated whether the loss of Diaphanous-related formin-3 (DIAPH3), frequently associated with metastatic breast and prostate cancers, correlates with increased sensitivity to taxanes, which are widely employed chemotherapies for patients with metastatic prostate and breast cancer.

Shlomo Melmed, MD, director of the Burns and Allen Research Institute at Cedar-Sinai, said, “By identifying cancer biomarkers, then customizing treatment plans for individuals based on this genetic information, we can greatly improve the effectiveness of cancer therapies. This customized plan replaces a one-size-fits-all approach to cancer treatment.” The study was published online on July 16, 2015, in the journal Scientific Reports.