Alzheimer's Linked to Loss of Y Chromosome in Men 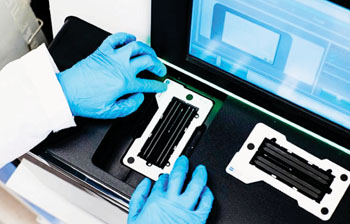 Image: Genotyping using single nucleotide polymorphism (SNP) arrays (Photo courtesy of Illumina).
Men with blood cells that do not carry the Y chromosome are at greater risk of being diagnosed with Alzheimer's disease (AD), and this is in addition to an increased risk of death from other causes, including many cancers.

By using standard molecular techniques, the identification of Loss of Y Chromosome (LOY) in blood is easy to determine when it occurs in 10% or more of blood cells with a nucleus containing DNA. As well as being relatively common in older men, it also occurs but less frequently in those who are younger.

The teams found that in the case-control study, males with AD diagnosis had higher degree of LOY mosaicism, as there were 606 AD events. Furthermore, in two prospective studies, men with LOY at blood sampling had greater risk for incident AD diagnosis during follow-up time, with 140 AD events. They found that men whose samples showed LOY in a significant fraction of their blood cells lived an average of 5.5 years less than men whose blood was not affected by LOY. Thus, LOY in blood is associated with risks of both AD and cancer, suggesting a role of LOY in blood cells on disease processes in other tissues, possibly via defective immunosurveillance. As a male-specific risk factor, LOY might explain why males on average live shorter lives than females.

Lars A Forsberg, PhD, a professor of Immunology and Genetics and lead author of the study said, “The addition of LOY testing in the general population could give medical practitioners the possibility of using preventive strategies in men at risk. If we could predict which men have an increased risk of cancer, we could watch them closely for the development of disease and also use appropriate preventive treatments. In short, the widespread use of LOY testing could radically decrease male mortality rates, and even perhaps eliminate the difference in life expectancy between the sexes.” The study was published on May 23, 2016, in the American Journal of Human Genetics.