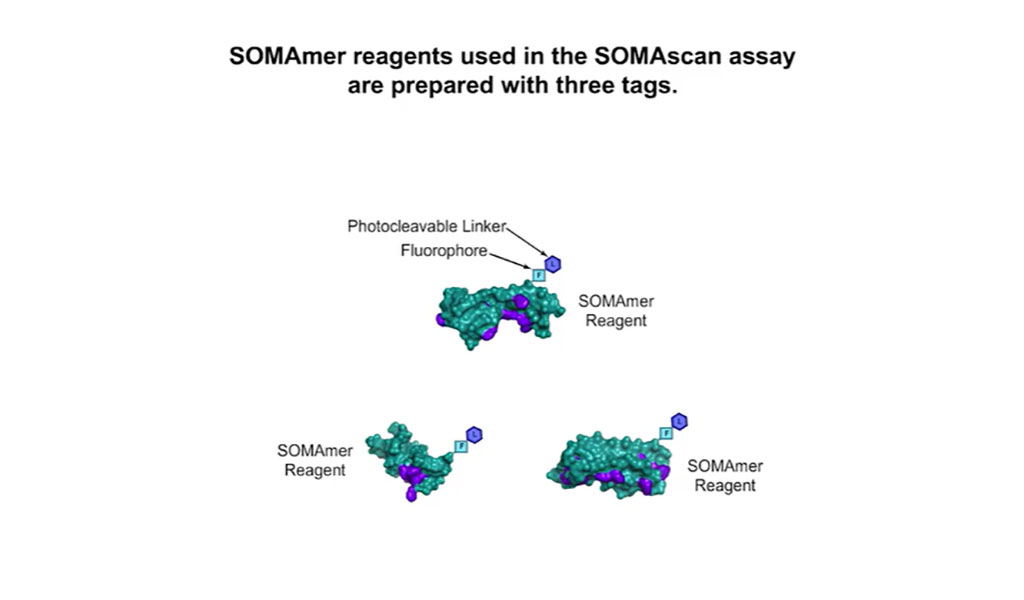 Image: Method for measuring large numbers of protein components in a single blood test (Photo courtesy of SomaLogic)
A proof-of-concept study demonstrated that protein expression patterns in plasma samples were indicative of many different health issues, and that combining large-scale protein scanning with machine learning was a viable approach for the development of new diagnostic and prognostic tools.

Proteins represent an enormous potential resource for personalized, systemic and data-driven diagnosis, prevention, monitoring, and treatment. However, the concept of using plasma proteins for individualized health assessment across many health conditions simultaneously has not been tested.

The investigators employed a technique that used fragments of nucleic acids known as aptamers to bind to target proteins. Aptamers are nucleic acid species that have been engineered through repeated rounds of in vitro selection to bind to various molecular targets such as small molecules, proteins, nucleic acids, and even cells, tissues, and organisms. Aptamers are useful in biotechnological and therapeutic applications as they offer molecular recognition properties that rival that of antibodies. In addition to their discriminate recognition, aptamers offer advantages over antibodies as they can be engineered completely in a test tube, are readily produced by chemical synthesis, possess desirable storage properties, and elicit little or no immunogenicity in therapeutic applications. Relative to monoclonal antibodies, DNA aptamers are small, stable, and non-immunogenic.

The investigators used SomoLogic’s genetic sequencing technology, to quantify the aptamers and determine which proteins were present and in what concentrations. For the current study, 5,000 proteins in plasma samples contributed by nearly 17,000 participants in five observational cohorts were scanned resulting in about 85 million protein targets being measured.

Results of this proof-of-concept study demonstrated that protein expression patterns reliably encoded for many different health issues, and that large-scale protein scanning coupled with machine learning was a viable approach for exploiting this information.

"Proteins circulating in our blood are a manifestation of our genetic make-up as well as many other factors, such as behaviors or the presence of disease, even if not yet diagnosed," said contributing author Dr. Claudia Langenberg, a program leader at the University of Cambridge School of Clinical Medicine. "This is one of the reasons why proteins are such good indicators of our current and future health state and have the potential to improve clinical prediction across different and diverse diseases."

"It is remarkable that plasma protein patterns alone can faithfully represent such a wide variety of common and important health issues, and we think that this is just the tip of the iceberg," said first author Dr. Stephen Williams, Chief Medical Officer at SomaLogic. "We have more than a hundred tests in our SomaSignal pipeline and believe that large-scale protein scanning has the potential to become a sole information source for individualized health assessments."

The plasma protein analysis study was published in the December 2, 2019, online edition of the journal Nature Medicine.