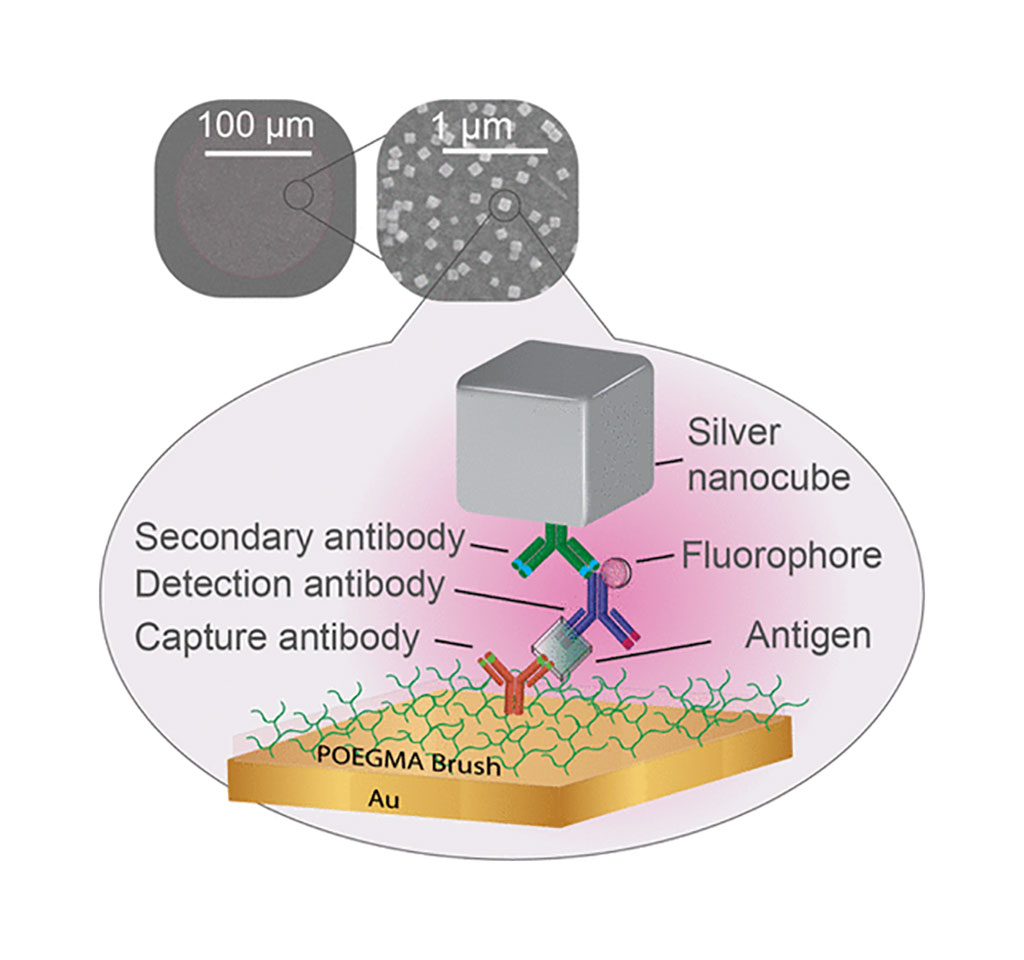 Image: Schematic diagram of ultrabright fluorescence readout of an inkjet-printed immunoassay using plasmonic nanogap cavities (Photo courtesy of Duke University).
Plasmonics is a scientific field that traps energy in a feedback loop called a plasmon onto the surface of silver nanocubes. When fluorescent molecules are sandwiched between one of these nanocubes and a metal surface, the interaction between their electromagnetic fields causes the molecules to emit light much more vigorously.

Fluorescence-based microarrays are promising diagnostic tools due to their high throughput, small sample volume requirements, and multiplexing capabilities. However, their low fluorescence output has limited their implementation for in vitro diagnostics applications in point-of-care (POC) settings.

Biomedical Engineers and their colleagues at the Duke University (Durham, NC, USA) built their super-sensitive diagnostic platform called the D4 Assay onto a thin film of gold, the preferred yin to the plasmonic silver nanocube's yang. The platform starts with a thin layer of polymer brush coating, which stops anything from sticking to the gold surface that the scientists do not want to stick there. They then use an ink-jet printer to attach two groups of molecules tailored to latch on to the biomarker that the test is trying to detect. One set is attached permanently to the gold surface and catches one part of the biomarker. The other is washed off of the surface once the test begins, attaches itself to another piece of the biomarker, and flashes light to indicate it has found its target.

By integration of a sandwich immunoassay microarray within a plasmonic nanogap cavity, the bioengineers demonstrated strongly enhanced fluorescence which is critical for readout by inexpensive POC detectors. The immunoassay consists of inkjet-printed antibodies on a polymer brush which is grown on a gold film. Colloidally synthesized silver nanocubes are placed on top and interact with the underlying gold film creating high local electromagnetic field enhancements. By varying the thickness of the brush from 5 to 20 nm, up to a 151-fold increase in fluorescence and 14-fold improvement in the limit-of-detection is observed for the cardiac biomarker B-type natriuretic peptide (BNP) compared to the unenhanced assay, paving the way for a new generation of POC clinical diagnostics.

Maiken H. Mikkelsen, PhD, an assistant professor and a senior author of the study, said, “One of the big challenges in point-of-care tests is the ability to read out results, which usually requires very expensive detectors. That's a major roadblock to having disposable tests to allow patients to monitor chronic diseases at home or for use in low-resource settings. We see this technology not only as a way to get around that bottleneck, but also as a way to enhance the accuracy and threshold of these diagnostic devices.” The study was published on May 5, 2020 in the journal Nano Letters.