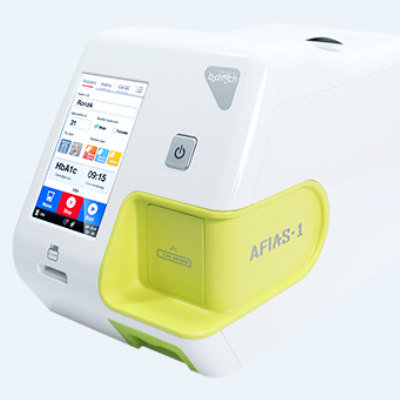 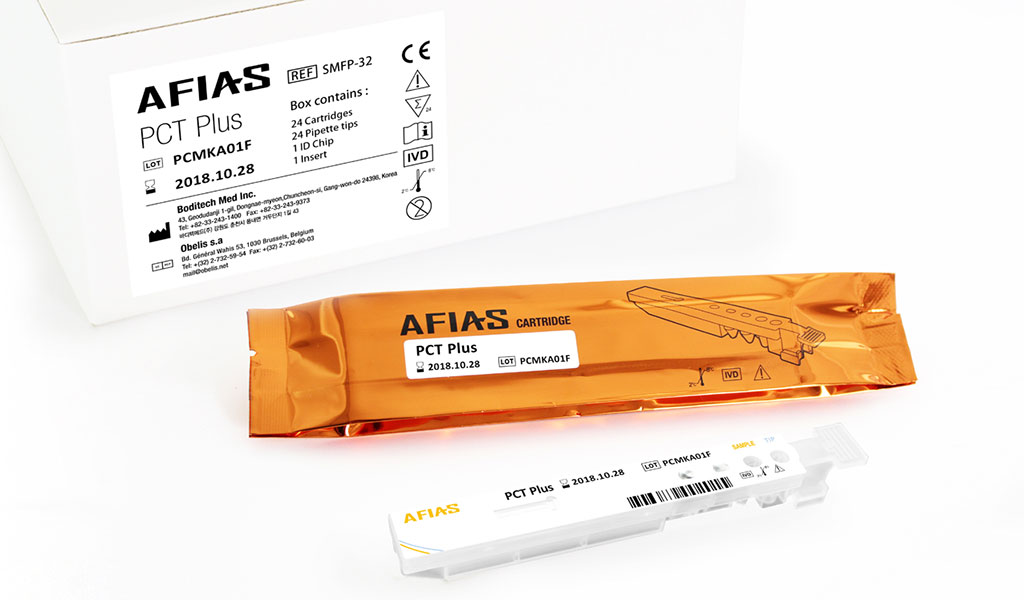 The AFIAS PCT Plus is a fluorescence immunoassay (FIA) for the quantitative determination of Procalcitonin (PCT) in human whole blood / serum / plasma. It is useful as an aid in management and monitoring of bacterial infection and sepsis. (Photo courtesy of Boditech).
There is a growing use of procalcitonin (PCT) measurements as a mean to diagnose and manage sepsis and PCT emerged as a useful tool to manage it accordingly, particularly in the emergency department (ED) and intensive care units (ICU).

PCT has a fair diagnostic accuracy for bacteremia in adult, neonates, infants, and children, hospitalized patients suspected of infection or sepsis. Low procalcitonin levels can be used to rule out the presence of bacteremia. All commercial quantitative assays use the same ‘sandwich enzyme-linked immunosorbent assay (ELISA) principle to quantify PCT by forming antibody–procalcitonin–antibody complexes.

Scientists connected with the Hospital Center Université de Montpellier (Montpellier, France) analyzed the performance of the AFIASPCT Plus assay that was conducted using the AFIAS-6 instrument (Boditech, Dongnae-myeon, Republic of Korea). The AFIAS PCT Plus assay is a fluorescence immunoassay that quantifies PCT concentration in serum, plasma and whole blood (10–50 μL) drawn from a finger or heel using a capillary tip. The AFIAS-6 point of care (POC) assay uses an all-in-one cartridge which automates the entire procedure from sample preparation to test. PCT levels were determined using the BRAHMS PCT assay (B·R·A·H·M·S GmbH, Hennigsdorf, Germany), which is routinely used at the central laboratory.

Analytical performances including imprecision studies, limit of blank (LoB), limit of detection (LoD) and limit of quantification (LOQ) were determined. The method comparison was performed using plasma versus whole blood for the BRAHMS Kryptor CompactPlus versus AFIAS-6, respectively. The scientists reported that the total imprecision was far from the coefficient of variation (CV) of 4.5% claimed by the manufacturer and close to 10%, for levels of PCT at 0.4 and 8.3 μg/L. The LoD of this novel PCT assay was found to close to the LoD provided by the manufacturer at 0.04 μg/L. The LOQ was higher than that claimed by the manufacturer (0.1 versus 0.002, respectively). Correlation studies showed a good correlation between PCT measurements using plasma on Kryptor system and on corresponding whole blood with POC reaching a bias of −0.04 in the range from 0.02 to 2 μg/L.

The authors concluded that the novel PCT assay on AFIAS-6 is an acceptable POC alternative for the diagnosis and management of sepsis at EDs to improve the flow of patients, as results are consistent with those of the standard PCT Kryptor Compact Plus assay, despite its higher imprecision. The study was available online since October 26, 2019 in the journal Practical Laboratory Medicine.