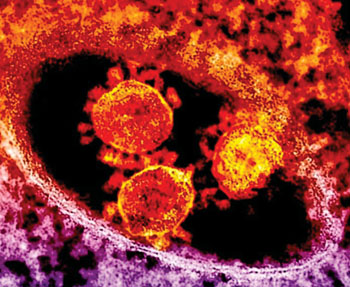 Image: Highly-magnified, digitally-colorized transmission electron micrograph (TEM) of a number of red-colored, spherical-shaped Middle East Respiratory Syndrome Coronavirus (MERS-CoV) virions (Photo courtesy of NIAID – [US] National Institute of Allergy and Infectious Diseases).
Middle East respiratory syndrome (MERS) is a viral respiratory disease caused by a novel coronavirus (MERS‐CoV) that was first identified in Saudi Arabia in 2012 and is classified as an emerging disease.

The diagnostic kit consists of two independent assays, one targeting a region upstream of the E gene (upE) and the other targeting open reading frame 1a (ORF1a) of the MERS-CoV genome. Both assays include a heterologous amplification system, an internal control to identify possible RT-PCR inhibition and to confirm the integrity of the reagents of the kit. The test is to be used on in lower respiratory specimens, tracheal aspirate and or tracheal secretions, from individuals with signs and symptoms of infection with MERS-CoV in conjunction with epidemiological risk factors.

The RealStar MERS-CoV RT-PCR Kit (altona Diagnostics; San Francisco, CA, USA) has been authorized by the US Food and Drug Administration, (FDA; Silver Springs, MD, USA) under an EUA for use by Clinical Laboratory Improvement Amendments (CLIA) High Complexity Laboratories and similarly qualified non-US laboratories. This test has been authorized only for the detection of MERS-CoV and the test is only authorized for the duration of the declaration that circumstances exist justifying the authorization of the emergency use of in vitro diagnostics for detection of MERS-CoV, unless the authorization is terminated or revoked sooner.

The incubation period for MERS, the time between when a person is exposed to MERS-CoV and when they start to have symptoms, is usually about five or six days, but can range from 48 hours to 14 days. Symptoms of MERS-CoV include fever, cough and shortness of breath. Some people also had gastrointestinal symptoms including diarrhea and nausea and or vomiting. For many people with MERS, more severe complications followed, such as pneumonia and kidney failure. About three or four out of every 10 people reported with MERS have died. People with pre-existing medical conditions, also called comorbidities, may be more likely to become infected with MERS-CoV, or have a severe case. The disease has recently been reported and spread from the Middle East to Europe and more recently South Korea.