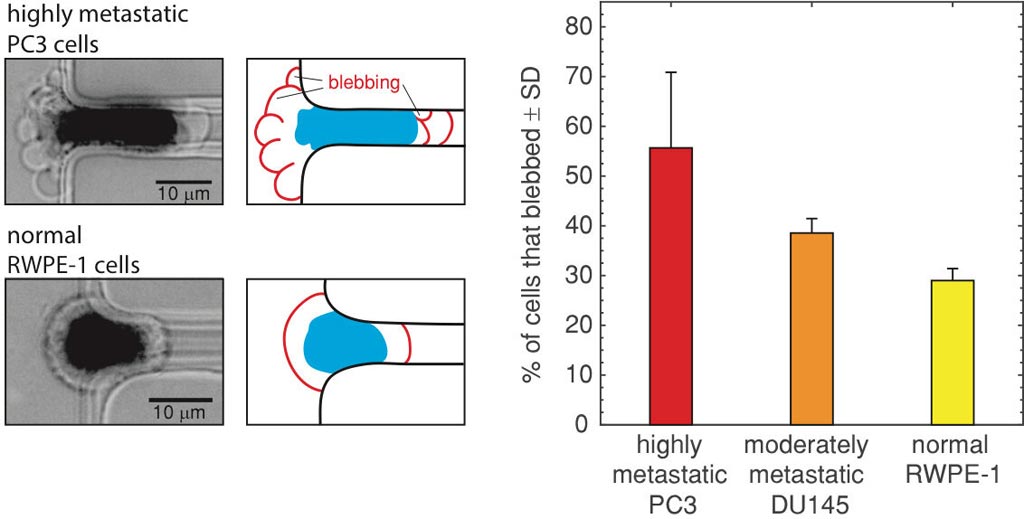 Since most prostate tumor cells that survive current treatment regimens become metastatic, there is an urgent need for new tools to detect metastatic prostate cancer that do not rely on prostate specific antigen (PSA) measurements, which cannot accurately identify cells with metastatic potential.

Plasma membrane blebbing (in which portions of the cell’s outer layer bulges outward from the more rigid inner layer) is known to provide important metastatic capabilities to cancer cells by aiding cell detachment from the primary tumor site and increasing cell deformability to promote cell migration through the extracellular matrix. In fact, highly metastatic prostate cancer cells flowing through a microfluidic channel form 27% more plasma membrane blebs than normal cells and have a lower stiffness (about 50%).

Mechanistically, increased blebbing by highly metastatic cells was attributed to low levels of the protein F-actin, which resulted in a reduced number of binding sites for proteins that normally anchor the cell’s plasma membrane to the inner cortex.

The fluid biopsy device for detection of highly metastatic prostate cancer cells was described in the May 21, 2019, online edition of the journal Biomicrofluidics.