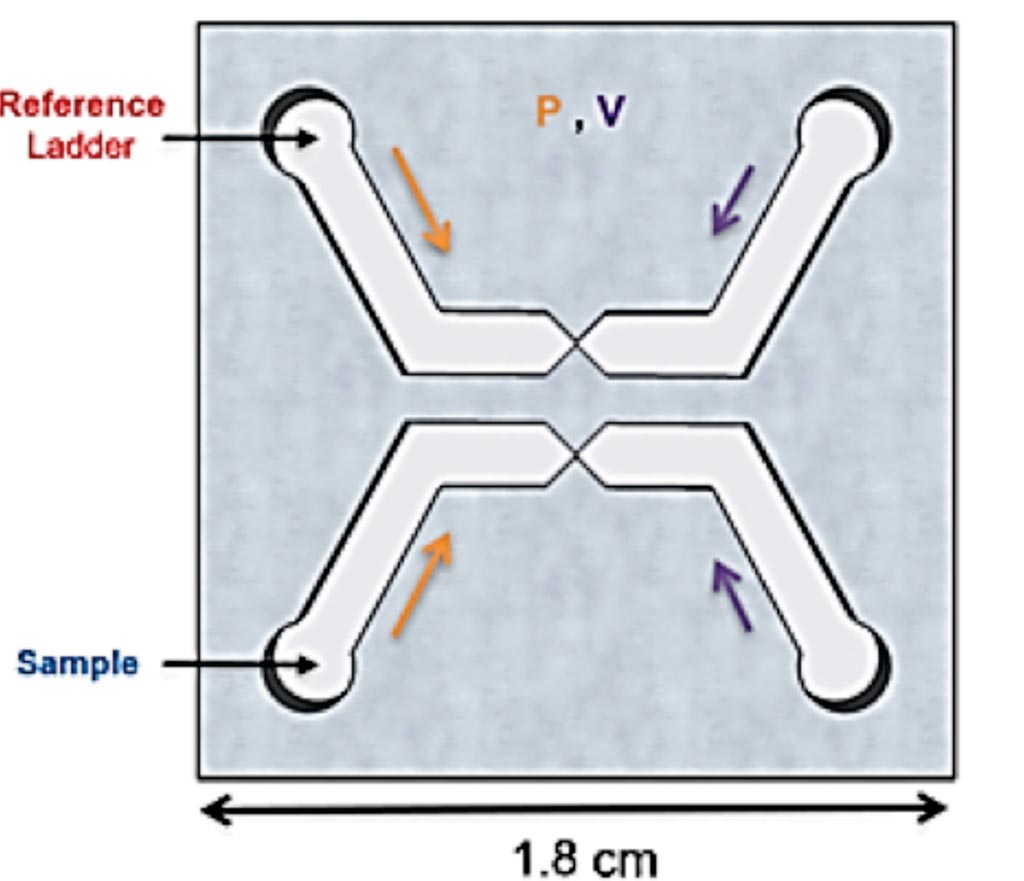 Image: A sketch of µLAS chip with two independent channels actuated with the same pressure and voltage. Each channel contains a funnel region that functions to separate and concentrate DNA in line (Photo courtesy of University of Lausanne).
People with Huntington's disease suffer from jerky body movements and decreasing mental abilities. The condition usually leads to death 15 to 20 years after diagnosis. The cause of the disease is a region in the Huntingtin gene (HTT) that is absent in healthy people.

A novel lab-on-chip system, termed µLAS (µLAboratory for DNA Separation) has been designed which is composed of two identical side-by-side channels operated with the same actuation parameters, so as to characterize a sample with respect to a reference DNA ladder in real time.

Scientists from the University of Lausanne (Lausanne, Switzerland) extracted the DNA from blood cells, amplified the concerned region and determined its size with a newly developed chip. The chip holds two small, funnel-shaped chambers a fraction of a millimeter wide. Voltage and pressure are applied to these chambers so as to separate the electrically charged DNA fragments according to their size. The smaller fragments are pushed down the funnel much more than the large ones. By adding a fluorescent dye, the team easily detected the exact position of the fragments under a microscope and deduced their length.

The variable length of the DNA fragments is caused by a repetition of three nucleotides of the genetic code (CAG), typical for trinucleotide diseases like Huntington's. The mutation leads to destructive changes in the encoded protein that are currently not fully understood, but the protein produced by the mutated gene is known to be toxic to brain cells. Healthy people have 35 or less of these repeats, whereas most patients have 40 or more. Knowing the exact size is important for forecasting and managing the incurable disease. The scientists detected heterogeneous allele lengths in eight samples from myotonic dystrophy type 1 and Huntington disease patients with up to 750 CAG/CTG repeats in five minutes or less.

The high sensitivity of the method allowed us to minimize the number of amplification cycles and thus reduce amplification artifacts without compromising the detection of the expanded allele. These results suggest that µLAS can speed up routine molecular biology applications of repetitive sequences and may improve the molecular diagnostic of expanded repeat disorders. Huntington's disease is only one of over twenty known trinucleotide diseases. Others are spinocerebellar ataxia, fragile X syndrome, myotonic dystrophy and Friedreich's ataxia. Currently there is no treatment available for these hereditary diseases. The study was published on January 10, 2019, in the journal Scientific Reports.