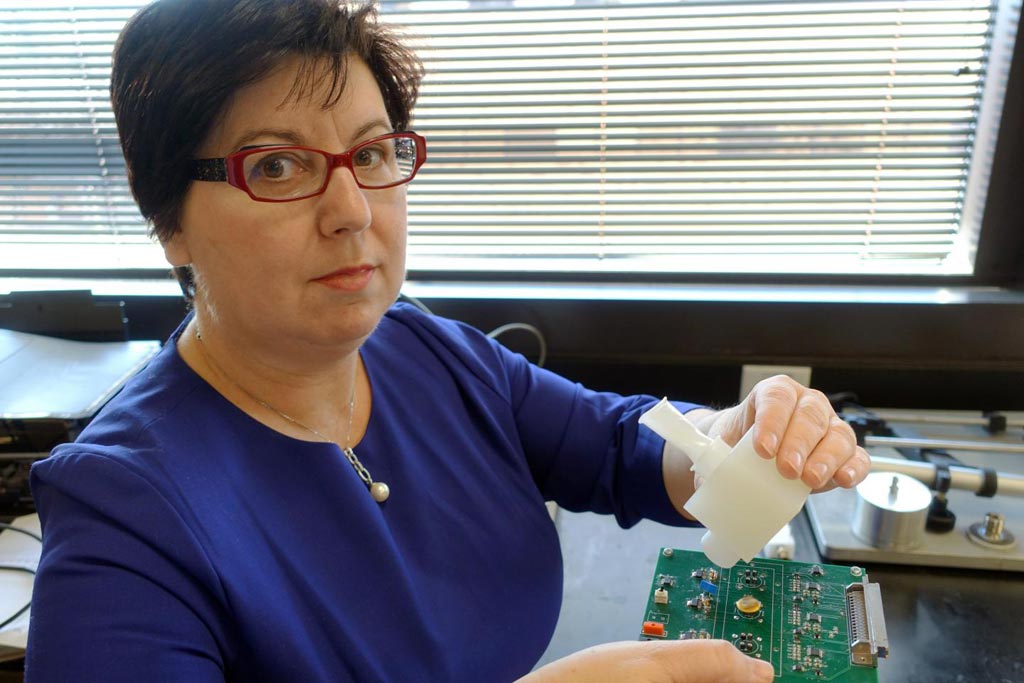 Image: Dr. Perena Gouma displays a hand-held breath monitor that can detect the flu virus (Photo courtesy of the University of Texas, Arlington).
A novel breathalyzer device has been developed that enables detection of volatile compounds produced by respiratory viruses such as the influenza virus and other pathogenic microorganisms.

A common feature of the inflammatory response in patients who have actually contracted influenza is the generation of a number of volatile products of the alveolar and airway epithelium. These products include a number of volatile organic compounds (VOCs) and nitric oxide (NO). Investigators at the University of Texas designed a portable three-sensor array microsystem-based device to detect these biomarkers, which can be used to detect the disease.

The device, which may in the future be available over-the-counter in pharmacies, resembles the breathalyzers used by police to determine alcohol levels in drivers suspected of being under the influence. The patient simply exhales into the device, which uses gas-specific semiconductor sensors to measure levels of biomarker in the breath.

"I think that technology like this is going to revolutionize personalized diagnostics. This will allow people to be proactive and catch illnesses early, and the technology can easily be used to detect other diseases, such as Ebola virus disease, simply by changing the sensors," said first author Dr. Pelagia-Irene Gouma, professor of materials science and engineering at the University of Texas. "Before we applied nanotechnology to create this device, the only way to detect biomarkers in a person's breath was through very expensive, highly-technical equipment in a lab, operated by skilled personnel. Now, this technology could be used by ordinary people to quickly and accurately diagnose illness."

The breathalyzer device was described in detail in a paper published in the January 20, 2017, online edition of the journal Sensors.