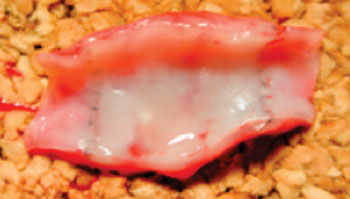 Image: Gross examination of an explanted TPU conduit after six months shows a white shiny inner surface without evidence of clot formation (Photo courtesy of Medical University of Vienna).
A new generation of artificial blood vessels gradually degrades as it is replaced by endogenous tissue that restores full biological function.

In a study conducted on a group of 34 rats they investigated the in vitro and in vivo biocompatibility of thin host-vessel-matched grafts formed from hard-block biodegradable TPU. Expanded polytetrafluoroethylene (ePTFE) conduits served as control grafts in 34 other rats. Grafts were analyzed by various techniques after retrieval at different time points (one week; 1, 6, 12 months).

Results published in the January 1, 2015, issue of the journal Acta Biomaterialia revealed that TPU grafts showed significantly increased endothelial cell proliferation in vitro. Population by host cells increased significantly in the TPU conduits within one month of implantation. After long-term implantation, all the TPU implants, but only 93% of the ePTFE conduits, were expanded and unblocked with no signs of aneurysmal dilatation. Substantial remodeling of the degradable grafts was observed but varied between subjects. Intimal hyperplasia was found in 29% of the ePTFE conduits but not in the TPU implants.

First author Dr. Helga Bergmeister, professor of surgery at Vienna Medical University, said, "The rats' blood vessels were examined six months after insertion of the vascular prostheses. We did not find any aneurysms, thromboses or inflammation. Endogenous cells had colonized the vascular prostheses and turned the artificial constructs into natural body tissue."