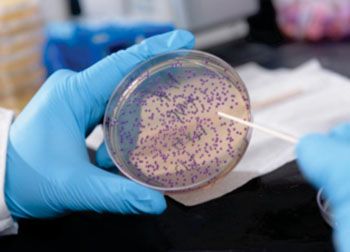 Image: Plate containing E. coli producing a purple pigment indicative of low levels of zinc. The bacterium could be used to detect nutritional deficiencies in resource-limited areas of the world (Photo courtesy of Rob Felt, Georgia Institute of Technology).
A series of genetic engineering steps led to the development of a bacterial biosensor capable of visually distinguishing levels of zinc, a critical micronutrient.

Micronutrient deficiencies, including zinc deficiency, are responsible for hundreds of thousands of deaths annually. A key obstacle to allocating scarce treatment resources is the ability to measure population blood micronutrient status inexpensively and quickly enough to identify those who most need treatment.

To overcome this obstacle a team of molecular microbiologists at the Georgia Institute of Technology (Atlanta, USA) developed a novel approach for inexpensive screening of micronutrients, with zinc being the test case.

Towards this end, the investigators genetically engineered a strain of Escherichia coli to produce different colored pigments (violacein, lycopene, and beta-carotene) in response to different extracellular zinc levels. Genes for the pigments were taken from other organisms and inserted into the E. coli on a plasmid. The red and orange colors, lycopene and beta-carotene, were produced by genes taken from Pantoea anantis, a plant pathogen. The purple color, violacein, came from a soil bacterium.

Obtaining discrete color states in the carotenoid pathway required precise engineering of the E. coli's metabolism to prevent a reaction at low zinc concentrations but allow complete reaction at higher concentrations, and all under the constraints of the bacterium's natural regulator limitations. A combination of gene dosage, post-transcriptional, and post-translational regulation was necessary to allow visible color change over physiologically relevant ranges representing a small fraction of the regulator’s dynamic response range, with further tuning possible by modulation of precursor availability.

In practice, a pellet of the engineered bacteria was mixed with the plasma from a human subject. The E. coli multiplied, producing the color corresponding to the level of zinc in the sample. Purple corresponded to dangerously low levels, while red indicated borderline levels, and orange normal levels. The color was readily visible without any diagnostic or other electronic equipment.

"We think this is just enough technology to meet the needs," said Dr. Mark Styczynski, assistant professor of chemical and bio-molecular engineering at the Georgia Institute of Technology. "Information we can provide could one day help nutritional epidemiologists and non-governmental organizations determine the populations of people that may need interventions to address nutritional deficiencies."

"The general idea of bio-sensing is certainly out there, but we have taken the step of developing a system that does not require equipment in the field," said Dr. Styczynski. "We believe this will work well in low-resource areas. This is a convincing proof-of-principle, and we hope to begin the translational aspects of this system based on what we have already shown. It is a matter now of reducing this to practice for something that will ultimately be useful."

The novel assay for zinc deficiency was described in a paper published in the September 2015 issue of the journal Metabolic Engineering.