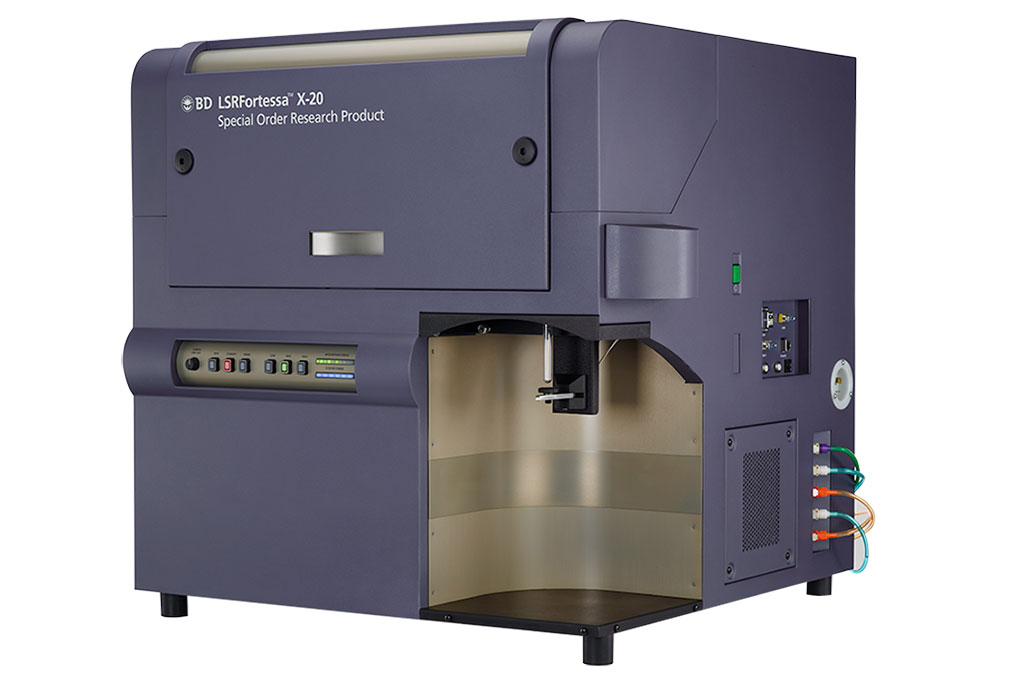 Image: The BD LSRFortessa X-20 Cell Analyzer can be configured with up to five lasers to detect up to 20 parameters simultaneously to support ever increasing demands in multicolor flow cytometry (Photo courtesy of BD Biosciences)
Modern immunologic studies increasingly requires high-dimensional analyses to understand the complex milieu of cell types that comprise the tissue microenvironments of disease. One of the cornerstones of immunology has been the detailed phenotypic classification of the cellular populations of the immune system.

The approach, named Infinity Flow, uses traditional flow cytometry as opposed to newer technologies like mass cytometry; it offers a potentially more accessible and less expensive route for single-cell proteomic studies. The method consists of two steps. First, the scientists stain all the cells in an experiment with antibodies to a small number of proteins. This is called the "backbone" panel and typically consists of around the 20 analytes that can be multiplexed using a conventional flow cytometer.

The scientists then subdivide the sample into a series of wells, each containing one of the additional antibodies to the proteins they are interested in. For instance, if the investigator want to look at another 200 proteins beyond those covered in the backbone panel, they would subdivide their sample into 200 different wells, each of which would contain an antibody against one of those 200 proteins. They then analyze each well of samples using flow cytometry, the BD Fortessa X-20 cytometer (BD Biosciences, Franklin Lakes, NJ, USA) allowing them to collect for each cell expression data on all of the "backbone" proteins along with data on the one additional protein designated for that sample well. With this data, the Infinity Flow software is able to predict for every cell being analyzed the expression levels of the 200 proteins of interest.

The team found that when they used a backbone panel of proteins common to all T cells, they were unable to impute protein expression levels for particular T-cell types due to the fact that, based on the backbone signature, all T cells looked the same. This, they noted, indicates that tailoring backbone panels to the samples and cell populations of interest can improve the assay's performance. They also found that the method was best able to impute expression levels for proteins that exhibited multimodal expression patterns and were highly or commonly expressed. In an evaluation of an Infinity Flow assay detailed in the study, they determined that they were able to generate "meaningful imputed signal" for 155 of 252 markers measured.

Mark Headley, PhD, an assistant professor in immunology and a leading author of the study, said, “Infinity Flow costs scale more slowly. We can measure 10 million, 20 million, 30 million cells at the same cost. It doesn't cost you more to do the assay the more cells you do.” The study was published on September 22, 2021 in the journal Science Advances.