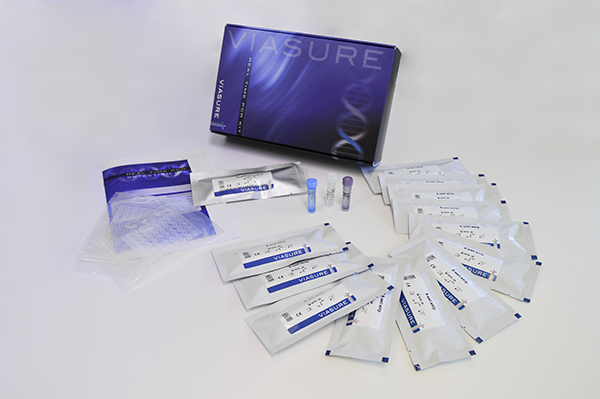 VIASURE HLA Celiac Real Time PCR Detection Kit
CerTest Biotec (Zaragoza, Spain) has developed a simple and ready to use real-time PCR for the detection of the principal alleles of the HLA system and the subsequent determination of the DQ2 and DQ8 antigens associated with Celiac disease (CD).

CD is an autoimmune disorder triggered by the ingestion of gluten in genetically susceptible individuals. Once thought to be a rare disease, CD diagnoses are increasing with current worldwide prevalence at 1%, with female predominance. The disease can occur at any age, with two peaks of onset - one shortly after weaning with gluten in the first two years of life, and the other in the second or third decades of life with a variety of symptoms/manifestations. This multifaceted clinical presentation leads to several phenotypes, i.e., gastrointestinal, extraintestinal, subclinical, potential, seronegative, non-responsive, and refractory.

As with any other autoimmune disease, CD has a strong hereditary component as testified by its high familial recurrence (~ 10–15%). Genetic susceptibility is associated with two sets of alleles, DQA105 - DQB102 and DQA103 - DQB103:02, which code for class II MHC DQ2 and DQ8 molecules, respectively. Although HLA-DQ2/HLA-DQ8 is frequent among the general population (25-35%), only the 3% of these HLA-compatible individuals will go on to develop CD. Being able to quickly and efficiently determine the status of the DQA and DQB alleles in potential CD patients or risk population could dramatically aide in diagnostic work-ups.

An early diagnosis could prevent the development of a clinically severe CD and for this, an exact individual genetic risk assessment could improve current diagnostic strategies and thus prognosis. Sensitive and specific serological tests have become gradually more important in the diagnostic work-up of CD although duodenal biopsy remains the diagnostic ‘gold standard’. To avoid performing this invasive technique, especially in children with symptoms suggestive of CD with high antibody titers, it has been proposed to replace it with genotyping. In a non-invasive way, identifying and quantifying the risk of developing CD in newborns from affected family members could be useful for programming individualized follow-up timing.

With the aim of contributing to the development of practical algorithm for the diagnosis of CD, CerTest has developed VIASURE HLA Celiac Real Time PCR Detection Kit for the detection of the principal alleles of the HLA system and the subsequent determination of the DQ2 and DQ8 antigens associated with CD. The kit detects the alleles DQA105, DQB10302, DQB102, DQA102, DQA103 and NO DQB102 in blood samples. DNA is extracted from blood specimens, multiplied using Real Time amplification and detected using specific primers and a fluorescent reporter dye probe for HLA alleles.

Using whole blood clinical samples of patients predisposed to CD, the clinical performance of VIASURE HLA Celiac Real Time PCR Detection Kit was evaluated, verifying that the test is as accurate, sensitive and specific as the assays with similar characteristics already available on the market. Notably, thanks to the product's design and its lyophilized format, handling is minimal and easier than similar molecular assays. These characteristics help the process to be faster, being able to obtain the results and therefore, the clinical diagnosis time in approximately two hours.