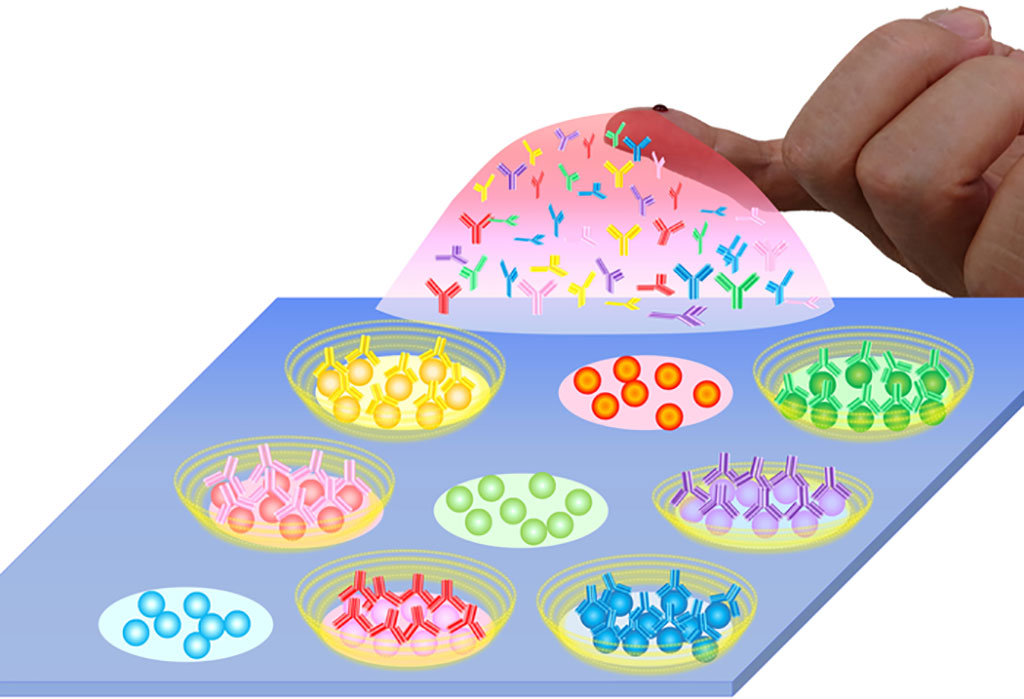 Image: The researchers developed a chip upon which key SARS-CoV-2 are fixed. A small drop of blood from the fingertip is necessary, and the sensitivity of the system is 500 times higher than that of conventional method (Photo courtesy of RIKEN Center for Emergent Matter Science)
Researchers have developed a diagnostic system that can rapidly and sensitively measure the amount of antibodies in the blood that can protect us from SARS-CoV-2, the virus that causes COVID-19.

The diagnostic system for on-site measurement of antibodies against the COVID-19 virus was developed by a research team at the RIKEN Center for Emergent Matter Science (CEMS; Saitama, Japan) and is expected to enable efficient and precise testing of SARS-CoV-2 vaccine efficacy at medical facilities.

Currently, several vaccines against SARS-CoV-2 have been developed, and vaccination is being conducted worldwide. In the medical field, antibody tests using a technique called immunochromatography are performed to determine whether antibodies have been produced as a result of viral infection or vaccination. However, because the results of this test are determined by looking with the naked eye at colored stripes on paper, it is not precise and not very sensitive. To compound the problem, blood samples must be sent to an outside testing center for more precise, quantitative results, with turnaround taking several days to a week.

Several years ago, researchers at RIKEN CEMS had developed a technology that immobilizes any organic compound, including substances of biological origin. Since then, the team has continued to improve on the system, focusing on immobilizing various allergens to measure the history of immune infection. They have already succeeded in developing a test kit using a microchip that contains more than 40 different allergens immobilized on it. Now, they have expanded their diagnostic tools for use in a system that immobilizes several key SARS-CoV-2 proteins, allowing the presence of antibodies against SARS-CoV-2 to be detected automatically.

The technique is based on the use of light. A substance that reacts to light is first coated on a plastic microchip, and a sample liquid containing the protein of interest is dropped onto the microchip in the form of a spot. Then the chip is exposed to ultraviolet light, which immobilizes the proteins. Using this method, the researchers developed a chip called a microarray upon which key SARS-CoV-2 are fixed. When antibodies in blood serum bind to the viral proteins on the chip they emit light, and the amount of emitted light can be measured precisely with a CCD camera. This value can therefore, be used to quantify the number of antibodies in a way that is not possible with immunochromatography. Furthermore, its operation is quite simple – just drop human blood serum onto the chip, press the start button, and wait. The reaction process, washing, and antibody detection are performed automatically in about 30 minutes.

“Standard quantitative analysis of antibodies usually requires a half milliliter of blood drawn from one of your arms, which is a lot!,” said Yoshihiro Ito at RIKEN CEMS, who developed the technology and led the research team. “But in our system, all that is needed is a small drop of blood from the fingertip, and the sensitivity of the system is 500 times higher than that of conventional immunochromatography, meaning that detection is possible even when the number of antibodies is very low.”

“In the past, our team has succeeded in developing antibody detection systems for measles, rubella, and chicken pox. Now we can also detect antibodies for the COVID-19 virus. This system is practical to use and will enable precision testing at any medical facility, making it easier to quickly determine on-site whether or not vaccination is necessary. It can also be used to conduct epidemiological surveys in preparation for future pandemics,” added Ito.