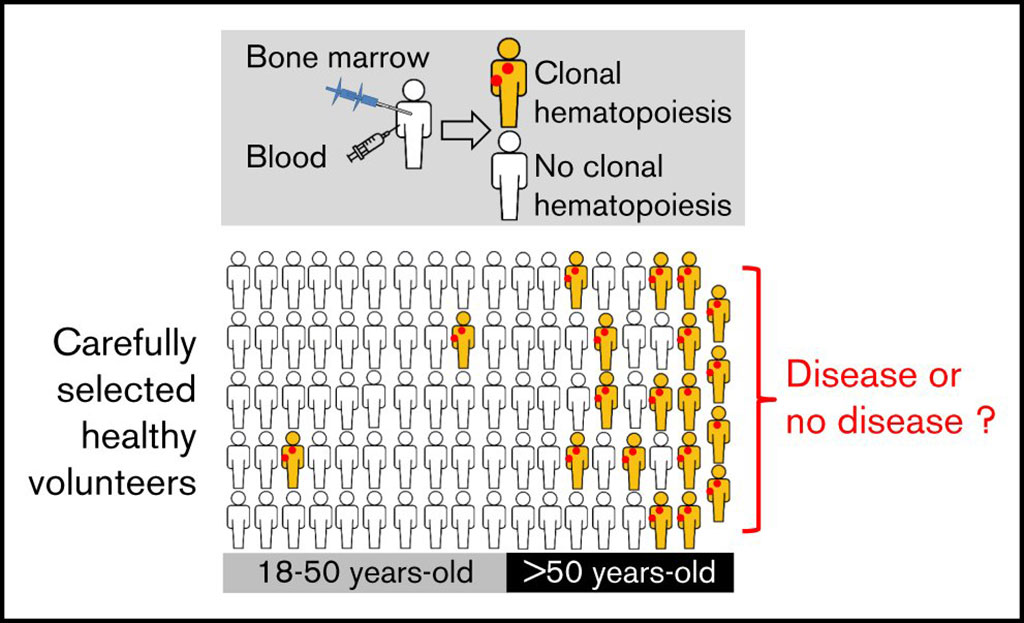 Image: Higher prevalence of clonal hematopoiesis found in the blood and bone marrow of older healthy volunteers (Photo courtesy of Sorbonne University).
Clonal hematopoiesis of indeterminate potential (CHIP) is defined as the presence of a clone at more than 2% of variant allele frequency (VAF) in peripheral blood (PB) of individuals with no evidence of hematologic disease.

Recently, targeted sequencing techniques allowed the discovery of a higher prevalence of clonal hematopoiesis (CH), prefacing the observation that virtually all healthy adults have detectable clones, provided that a highly sensitive method of detection is used. CHIP has been described as a risk factor for blood cancer.

Hematologists at the Sorbonne University (Paris, France) and their colleagues enrolled 102 healthy volunteers aged 18 to 81 years in a study. Bone marrow (BM) samples were collected through sternal puncture using the classical diagnostic procedure that is standard in France, and peripheral blood (PB) samples were taken at the same time. Cytomorphological analyses of the BM included the quantification of the hematopoietic lineages and their maturation as well as the assessment of dysplasia, defined as more than 10% of a lineage with dysplasia.

Both PB and BM samples were analyzed for 82 volunteers, but only PB samples were available for eight individuals and only BM samples were available for seven individuals. DNA extraction was performed using QIAsymphony DNA kits (Qiagen, Hilden, Germany). Libraries and sequencing of a panel of 41 genes commonly mutated in myeloid malignancies were carried out. CH was defined as the presence of at least 10 reads carrying one somatic variant with a VAF greater than 1%.

The scientists reported that in bone marrow samples, clones were found in almost 40% of healthy volunteers who were more than 50 years old. The most frequent mutations were found in DNMT3A and TET2, with one individual carrying three variants. Variant allele frequencies were highly concordant between blood and bone marrow samples. No morphologic abnormalities or dysplasia were detected when bone marrow smears were carefully evaluated. Individuals with CH differed from others by age (62.8 versus 38.6 years) and platelet count (294 ×109/L versus 241 ×109/L), the latter was no longer significant when removing the two individuals who carried the JAK2 p.V617F mutation.

The authors concluded that they found a high prevalence of CH after 50 years of age by studying for the first time both BM and PB from healthy volunteers for whom they have assessed the normality of PB and BM morphology. In light of these results, the medical follow-up of individuals with CH can be carefully managed. Consequently, the detection of driver myeloid mutations should be interpreted with caution in the absence of cytological abnormalities in the blood and/or the bone marrow. The study was published on August 6, 2020 in the journal Blood Advances.