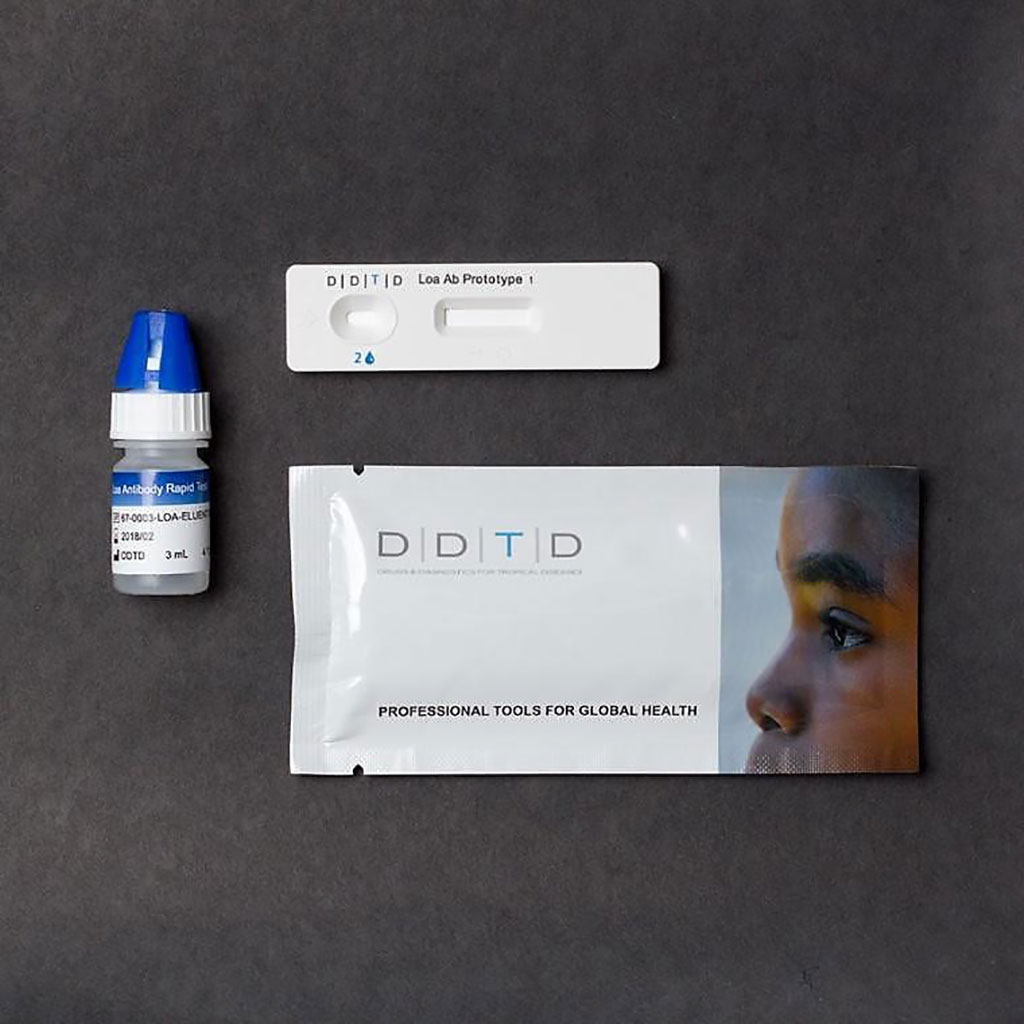 Image: The Loa Antibody Rapid Test detects human IgG against a 148-aminoacid sequence of Ll-SXP-1 (Photo courtesy of Drugs & Diagnostics for Tropical Diseases).
Loiasis, the disease caused by the infection with the filarial nematode Loa loa, is transmitted through the bite of tabanid flies of the genus Chrysops. It is endemic in Central and West Africa where, according to the most recent estimates, about 10 million people are infected.

There is a scarcity of convenient, commercial diagnostics for L. loa. Microscopy requires trained personnel and has low sensitivity, while the serodiagnosis is currently not standardized. Individual case management is also important in non-endemic countries to treat migrants, expatriates and tourists.

Scientists at the Sacro Cuore Don Calabria Hospital (Verona, Italy) retrospectively compared the performance of an Antibody Rapid Test (RDT) and a commercial ELISA pan-filarial test on 170 patients, 65 with loiasis [8 with eyeworm, 29 with positive microfilaremia, 28 with neither microfilaremia nor history of eyeworm but eosinophilia and history of Calabar swelling (probable loiasis)], 95 with other common parasitic infections and no previous exposure to L. loa (37 with M. perstans, one with Brugia sp., 18 with strongyloidiasis, 20 with schistosomiasis, five with hookworm, four with Ascaris lumbricoides infection, 10 with hyper-reactive malarial splenomegaly), and 10 uninfected controls.

The authors concluded that the novel lateral flow RDT has proven to be an accurate and user-friendly tool for the diagnosis of L. loa infection. While some cross-reactivity with M. perstans should be taken into account when considering its potential application as a screening tool in endemic areas, on the other hand this new test appears to be promising in the of non-endemic setting, where it could be included in a management algorithm. The study was published on May 26, 2020 in the journal PLOS Neglected Tropical Diseases.