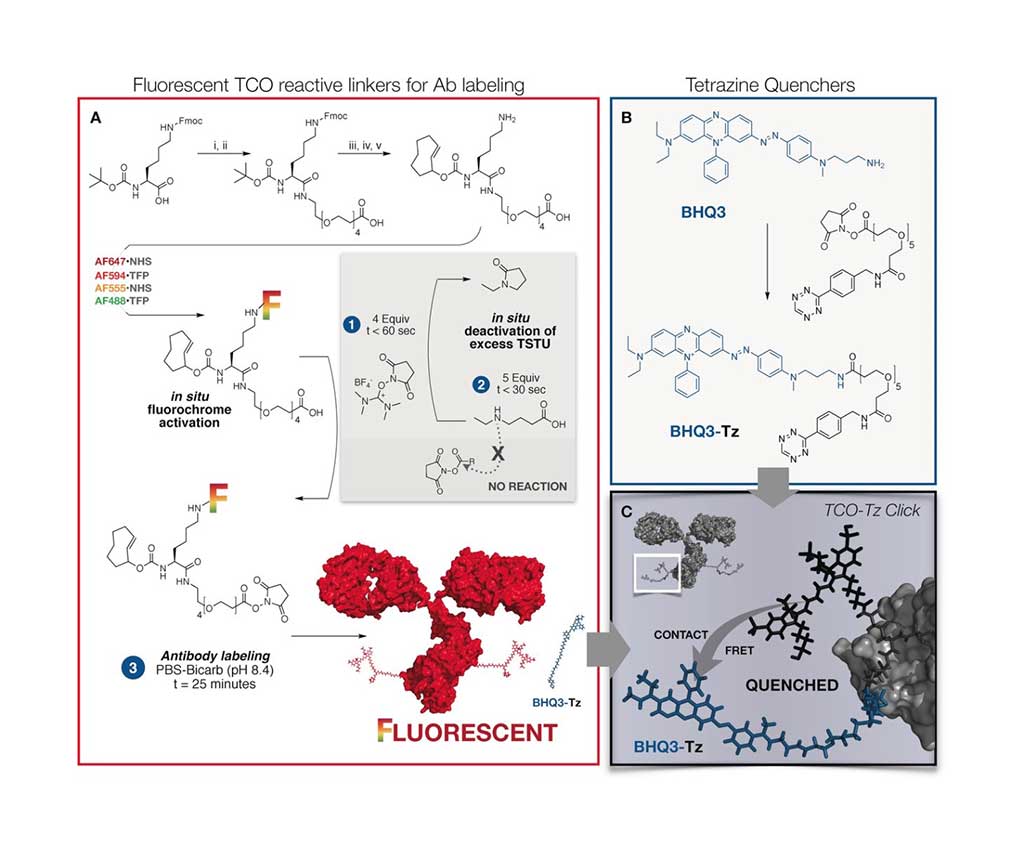 Image: Ultra-fast Cycling for Multiplexed Cellular Fluorescence Imaging (Photo courtesy of Massachusetts General Hospital Research Institute).
In the treatment of tumors, microenvironment plays an important role. It often contains immune cells that are so changed that they promote tumor growth. Until now, analyses of these dynamic changes with conventional biopsies and tissue sections could take days to weeks, or not occur at all prior to treatment.

One alternative method is fine needle aspiration, in which only a few thousand cells are taken from different parts of a tumor and its surroundings. This method has few risks and is faster because it does not require embedding or sectioning. However, to obtain a representative estimate of the immune cell populations in the tumor's microenvironment, many different stains must be carried out.

A team of scientist led by those at the Massachusetts General Hospital Research Institute and the Harvard Medical School (Boston, MA, USA) have developed an ultrafast, highly efficient, and gentle cyclic method for multiplexed protein profiling of individual cells, which allows for numerous different staining. Instead of splitting off the dye or bleaching it, the fluorescence of the stain is simply "switched off" with a black hole quencher. Black hole quenchers absorb the energy of a fluorescence dye over the entire visible spectrum and convert it to heat as soon as they get near enough. This switches off the glow of the dye.

The method uses a connector that contains a trans-cyclooctene group, a fluorescent dye that is attached to antibodies that specifically recognize the characteristic marker molecules of the cells. If the target marker is in a given sample, the antibody binds to it and the fluorescence can be detected. Then the quencher carrying a tetrazine group is added. Using this tetrazine group and the trans-cyclooctene, the quencher can simply be attached by being "clicked" on as though with a snap (hence the term click chemistry for this type of reaction). The quencher is thus site-specifically and very quickly and efficiently brought near to the dye, immediately quenching its fluorescence.

The rapidity of this click reaction is remarkable, running orders of magnitude faster than expected. The reason for this may be the strong interaction between the fluorescence dye and the quencher. The next fluorescent antibody can be applied immediately after the fluorescence quenching. The scientists were able to stain twelve different marker molecules in a sample within one hour. This makes it possible to rapidly characterize the immune cell populations in tumors to select the most suit able treatments.

The authors concluded that this novel method allowed multi‐cycle staining and immune cell profiling within an hour, leveraging the accelerated kinetics to open new diagnostic possibilities for rapid cellular analyses. The study was published in an early online version in the January 2020 edition of the journal Angewandte Chemie International Edition.