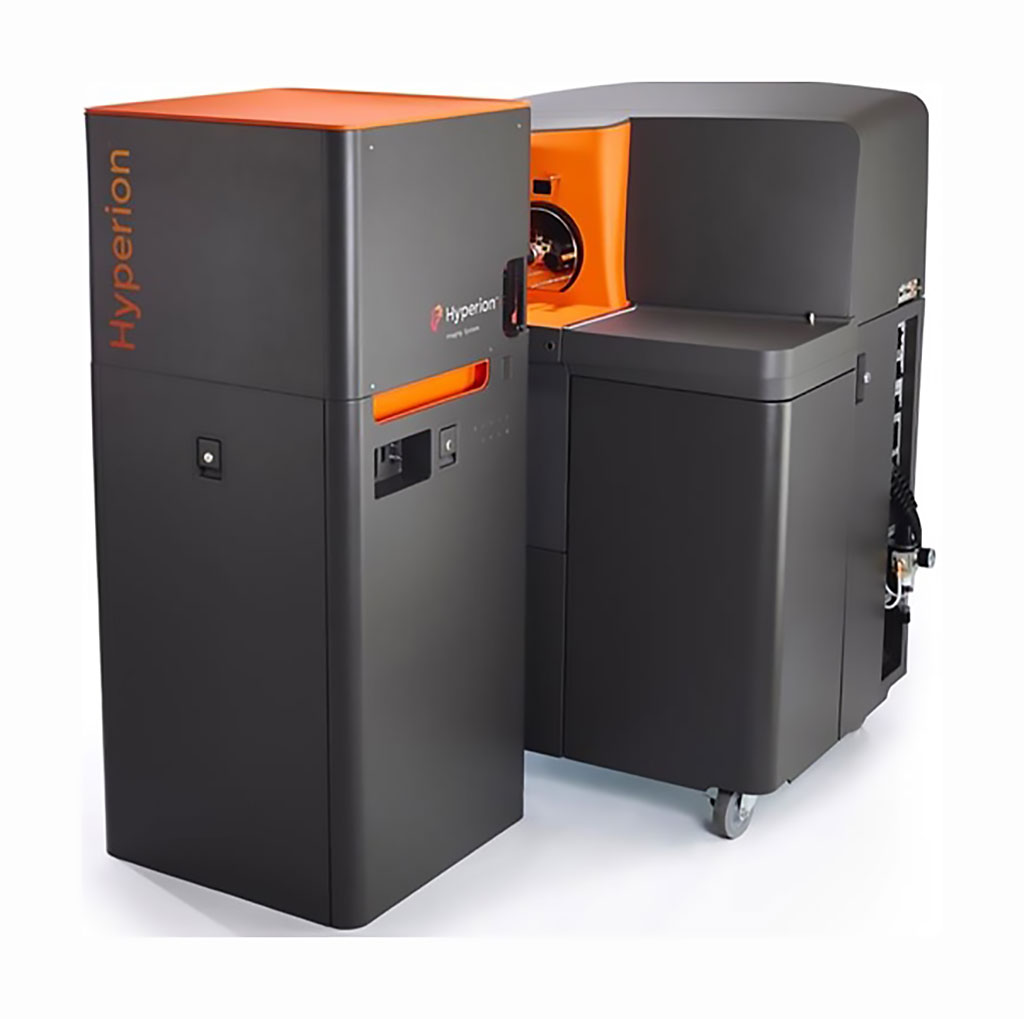 Image: The Hyperion Imaging System brings proven CyTOF technology together with imaging capability to empower simultaneous interrogation of four to 37 protein markers using Imaging Mass Cytometry (Photo courtesy of Fluidigm).
Changing the course of how diseases are treated and ultimately cured requires a comprehensive understanding of complex cellular phenotypes and their interrelationships in the spatial context of the tissue microenvironment.

Single-cell analyses have revealed extensive heterogeneity between and within human tumors, but complex single-cell phenotypes and their spatial context are not at present reflected in the histological stratification that is the foundation of many clinical decisions.

Scientists at the University of Zurich (Zurich, Switzerland) and their colleagues used imaging mass cytometry to simultaneously quantify 35 biomarkers, resulting in 720 high-dimensional pathology images of tumor tissue from 352 patients with breast cancer, with long-term survival data available for 281 patients. The team concentrated their efforts on single cells within these images to deeply profile tumors' phenotypes and organization.

The investigators used the Hyperion Imaging System (Fluidigm, South San Francisco, CA, USA) which combines immunohistochemical staining with mass-spectrometry-based detection to generate images. For their analysis, they designed a breast cancer-specific imaging mass cytometry panel of 35 antibodies, including ones aimed at detecting established targets like estrogen receptor, progesterone receptor, and HER2, but also the proliferation marker Ki-67 and cell lineage markers. The team reported that their images were comparable to those generated via immunohistochemistry or immunofluorescence approaches.

By quantifying the expression of these markers, the team could gauge the spatial features of these single cells and place them into phenotype clusters, of which they identified 14 main ones. Additionally, they uncovered 18 single-cell pathology subgroups. These subgroups, they noted, differed from the classical clinical subtypes and were associated with distinct clinical outcomes. For instance, single-cell pathology subgroup 1 (SCP1) was associated with patients with a promising prognosis, while SCP3 was linked to a poorer prognosis.

When they compared clinically defined subtypes and single-cell pathology subgroups, the scientists found the single-cell-based approach was better able to predict the overall survival of a patient. They replicated their analysis on a set of tumor samples from 73 patients and likewise uncovered the same cellular metaclusters and single-cell pathology subgroups. They noted, though, a difference in the proportion of the subgroups present, which they attributed to differences in the patient-selection strategies for the two cohorts.

Chris Linthwaite, MBA, president and CEO of Fluidigm, said, “This landmark study is the first to demonstrate the potential clinical value of highly multiplexed Imaging Mass Cytometry to identify breast cancer subtypes that correlate with clinical outcomes. By shedding new light with single-cell spatial images and data about the features of the tumor microenvironment, we believe this study will further increase adoption of IMC in translational and clinical investigatios to deliver better predictive and personalized approaches to cancer care in the future.” The study was published on January 20, 2020 in the journal Nature.