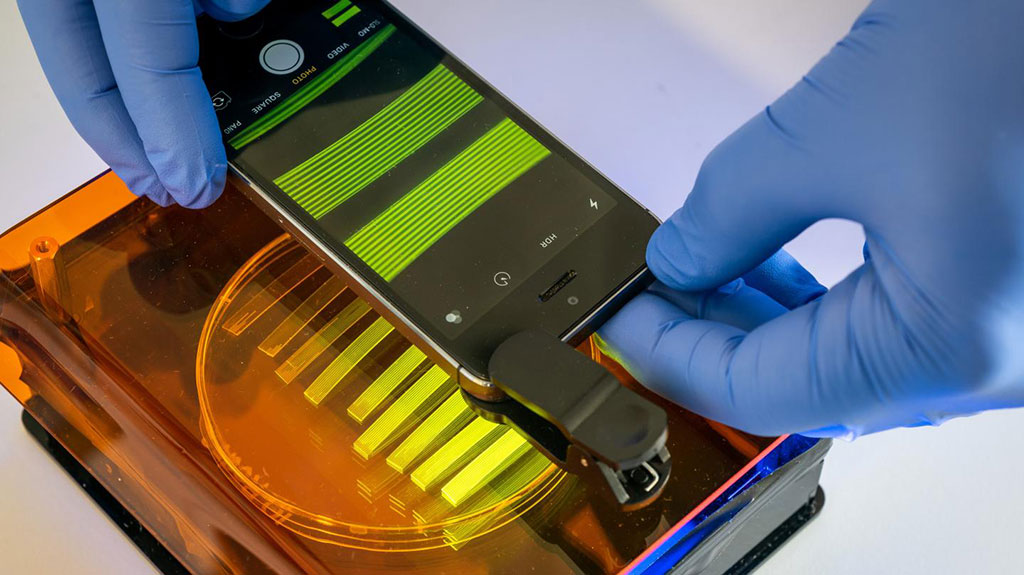 In its initial configuration, the assay is set to detect the bacterium Escherichia coli, which is found in about 80% of bacterial UTIs.

The test, as designed by investigators at the University of Bath (United Kingdom), is performed by passing a urine sample over a ridged plastic micro-capillary strip, to which are bound immobilized antibodies able to recognize E. coli bacteria. If E. coli are present in the sample, the antibodies will bind to them, preventing the bacteria from passing through that section of the plastic strip. An enzyme is added that causes a change in color that can be recorded by the smartphone camera. An application determines the concentration of E. coli in the sample by analyzing the image taken by the camera.

A prototype of the system operating with E. coli in synthetic urine was shown to be able to detect a minimal concentration of 240 CFU/mL (colony forming units per milliliter) of bacteria, compatible with cut-off levels for UTIs. The test took less than 25 minutes and did not require any sample preparation or concentration.

Senior author Dr. Nuno Reis, reader in the department of chemical engineering at the University of Bath, said, "The test is small and portable - so it has major potential for use in primary care settings and in developing countries. Currently, bacterial infections in UTIs are confirmed via microbiological testing of a urine sample. That is accurate, but time-consuming, taking several days. We hope that giving medical professionals the ability to quickly rule in or rule out certain conditions will allow them to treat patients more quickly and help them make better decisions about the prescription of antibiotics. The smartphone solves one of the biggest problems of the decentralizing of diagnostics because their capabilities are actually very sophisticated in certain conditions. They offer the same functionality as sophisticated scanners that have until now been available only in labs."

The rapid UTI test was described in the December 1, 2019, online edition of the journal Biosensors and Bioelectronics.