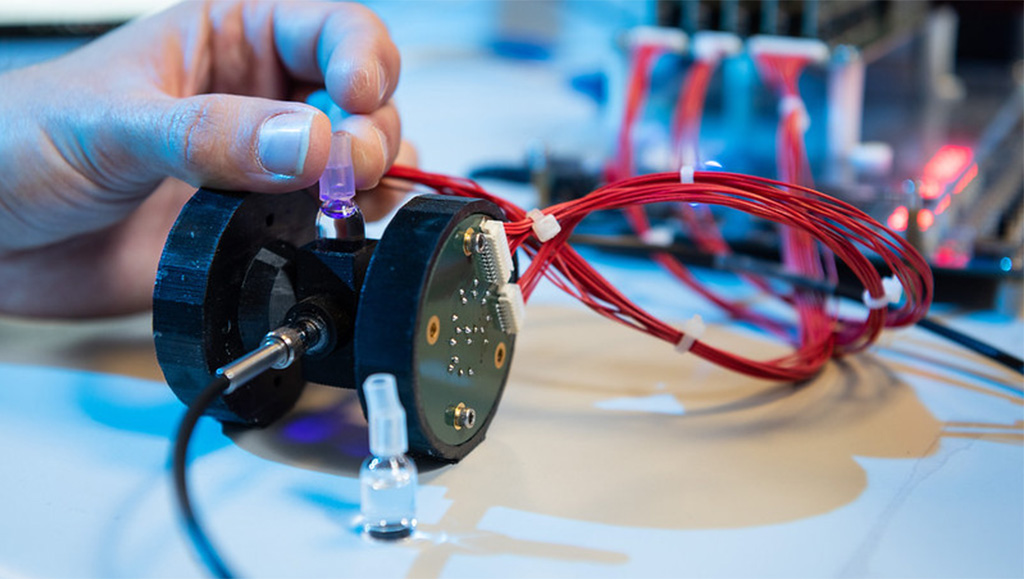 Image: The fluorescence fingerprinting device can test saliva for the presence of the synthetic cannabinoid receptor agonist “spice” in about five minutes (Photo courtesy of University of Bath)
A team of British researchers developed a rapid real-time, point-of-care test for the identification of synthetic cannabinoid receptor agonists (SCRAs), a class of illegal drugs known colloquilly as “Spice” or “K2”.

SCRAs are a family of compounds designed to mimic the effects of tetrahydrocannabinol (THC) and cannabidiol (CBD), the psychoactive molecules in cannabis, by binding to CB1 and CB2 cannabinoid receptors and acting as agonists for receptor function. CB1 receptors are most commonly found in the peripheral and central nervous system, while the structurally smaller CB2 receptors are mostly expressed within the immune system. Under normal endogenous conditions, these cannabinoid receptors have been found to modulate a variety of physiological and cognitive processes including fertility, pregnancy, pre- and postnatal development, appetite, pain sensation, inflammation, mood, and memory, causing a number of major side effects, both psychological and physiological. These include, but are not limited to, acute kidney injury, vomiting, cardiovascular complications, agitation, irritability, confusion, hallucinations, delusions, psychosis, and even death. The severity of these side effects are thought to be due to SCRAs having unusually high binding affinities at CB receptors, coupled with acting as full agonists of CB receptors.

SCRAs are highly potent and addictive drugs that are prevalent in the prison system and among homeless populations in the United Kingdom. SCRAs are chemically diverse, with over a hundred compounds used as recreational drugs. The chemical diversity of SCRA structures presents a challenge in developing techniques to detect them. Typically, GC-MS is used for chemical identification; however, this technology is not usually available in most settings where detection is critical, such as in hospital emergency rooms, in jails or prisons, or among homeless communities.

In this light, investigators at the University of Bath (United Kingdom) sought to develop a real time, point-of-care method for identification of SCRAs.

In a recent paper, they reported that fluorescence spectral fingerprinting, which required only about five minutes to perform, could be used to identify the likely presence of SCRAs, as well as provide more specific information on structural class and concentration. Furthermore, the investigators demonstrated that that fluorescence spectral fingerprints, combined with numerical modeling, could detect both parent and burnt material, and that such fingerprinting was also practical for detecting them in saliva.

Senior author Dr. Chris Pudney, senior lecturer in biology and biochemistry at the University of Bath, said, "My partner is a psychiatrist and she was telling me that currently they do not have a way to confirm when they suspect spice use, they just do not know for sure. You can test for it with a urine or blood sample that is sent off to a lab, but that takes a few days and so in most cases it's pointless. I started looking into the chemistry and it is actually similar to something we have developed for detection of biological molecules. We decided on saliva because it seemed tractable and less invasive than some other options. We have proved the concept with a test that is simple and very accurate. The hardware is compact and portable and the results are easy to understand. We are working on software now, so that the user has a simple “one click” way to use it."

The fluorescence fingerprinting method was described in the September 5, 2019, issue of the journal Analytical Chemistry.