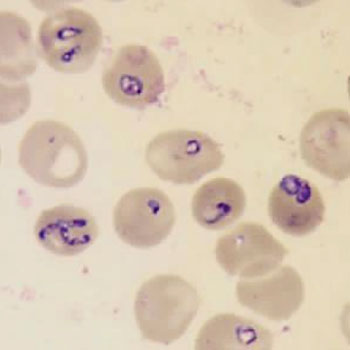 Image: Photomicrograph of Giemsa-stained thin blood smear showing Babesia organisms sequestered in erythrocytes (Photo courtesy of the CDC – [US] Centers for Disease Control and Prevention).
Anemia and thrombocytopenia are expected hematologic abnormalities in patients with acute babesiosis, whereas neutropenia is not usually considered a feature of this infection.

Babesiosis is a parasitic disease caused by intraerythrocytic protozoa of the Babesia genus such as Babesia microti as well as other species. Babesia are transmitted in nature through the bites of infected ticks, but can also be acquired through contaminated blood components from asymptomatic parasitemic donors or, more rarely, transplacentally.

Scientists at the New York Medical College (Valhalla, NY, USA) determined the frequency of neutropenia in cases of congenital babesiosis based on a literature review and on the findings in an unreported case. The frequency of neutropenia in adult patients was assessed based on a review of the medical records of 51 patients who were diagnosed with babesiosis between 2010 and 2013 at two medical centers in the Northeastern United States.

The authors concluded that neutropenia appears to be a common finding in infants with congenital babesiosis and is also observed not infrequently in adults with this infection. The study was published in the September 2015 issue of the American Journal of Clinical Pathology.